How to set Google Adsense Targetable Ad Placements in a website that has several language versions?

When trying to set a new custom channel as a targetable ad placement, there is an obligatory field called Site language. 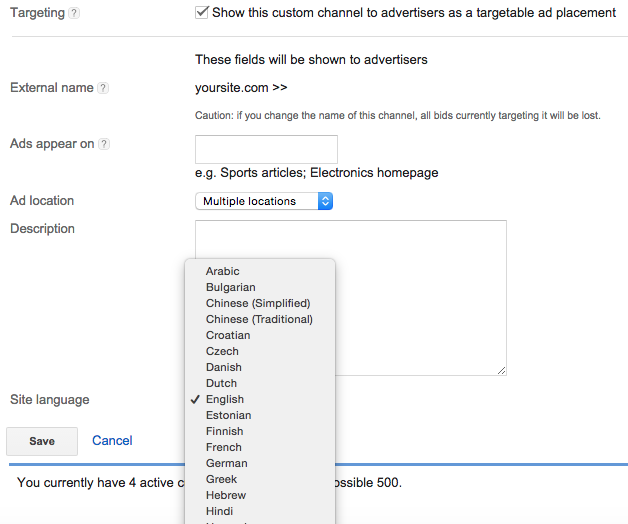 Do i have to create custom channels as a targetable ad placements for each language? If not, how will the advertiser know the exact language version in which their ads will be displayed on?

Google will target the ad toward the language of the page, the site, the user, and the advertiser: https://support.google.com/adsense/answer/2753586?hl=en

This is a good question however! I can see hesitating creating 24 channels though that may be a great idea(!) for the advertiser and you may (likely) get better bids on these channels. You can, I assume, use the description section for this too, however, I still think that separate channels is the best idea even though it is more work. It may be a price you want to pay for better ad placement, bids, and ad CTR (click-through rates). It sounds like a win win win to me.

Not the answer you're looking for? Browse other questions tagged google-adsense or ask your own question.

3
Google AdSense - set minimum CPC?
5
Alternative to Google Adsense which has good international coverage
0
Google Adsense Account Disapproved: Insufficient content, but want to ad adsense to another website
2
Does AdSense serve higher CPC ads to a website that has higher number of visits?
2
How many Google Adsense Ads for Multilingual Website
0
Adsense in a post that has an iframe