How can I avoid a too small h-bar (&hbar;) showing in Firexfox?

On the page https://www.motionmountain.net/bet.html the character h-bar (ℏ) is much smaller than an h, and hard to read. This happens only with Firefox (version 87.0, on OSX), not with Opera, Chrome or Safari. How can I avoid this?

The character appears a few times on the page. The first time is at the end of part 1 of the proposed physics bet.

The font used is a Google font.

I also filed a Firefox bug report. What can I do in the meantime?

Note that I just have a usual Firefox. I am a simple user, and did not change anything to the downloaded version. The Firefox of Stephen (below) has no such problem.

A. Here is a screen shot from my Firefox on OSX:

B. Here is a second screen shot of this stackexchange question (an older version), which uses other fonts, from my Firefox on OSX:

C. Here is a third screen shot from Chrome, on OSX, that shows no such problem:

All screen shots differ from the screenshot linked in the comment.

So far, I found only two solutions:

The Firefox development team is working on an improvement as well.

which yields the correct size.

Your page appears to use the Google web fonts "Open Sans" and "Crimson Text". Neither of those fonts has a glyph for ℏ as tested by Google's tool: 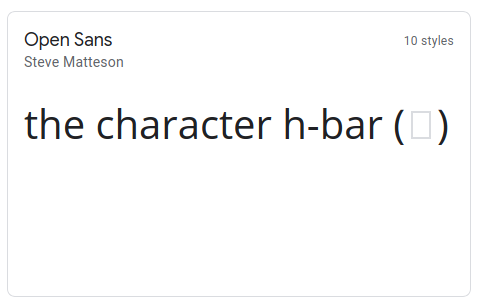 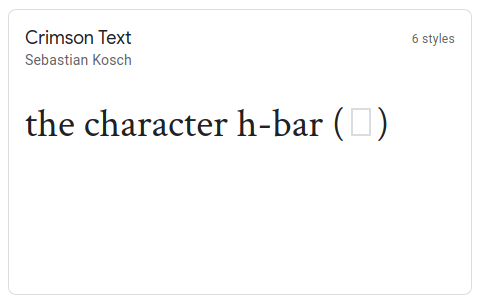 There are a couple Google fonts that support the ℏ character. Scrolling through I see "Noto" (several serif and sans-serif variants) and "Arimo". If you want this character to display consistently across all browsers and devices you need to use a font that contains a glyph for it.

Not the answer you're looking for? Browse other questions tagged html firefox or ask your own question.

2
What can cause a connection reset when site is visited with Firefox?
5
How to overcome politics of the net (Google translate code refuses to work from a specific region)
2
Why is CakePHP generating unrequested 301 redirects?
2
When using resources from cache Firefox show a “304” response but Chrome says “220 (from cache)”
2
Spurious &#8203; or \u200b being injected into my code