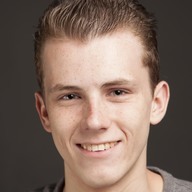 I'm Ruben, a 22 year old programmer from the Netherlands.

At the age of 15 I finally discovered the way of thinking that is required for programming. I have made attempts at programming since the age of 12 but every book or website I read made no sense to me and ended up with me giving up on it.

At one day, I needed my dad's help to alter a Simple Machine Forums page to show data from a custom MySQL database and when he had made a start but said he no longer had time, I kept trying myself until it worked. This was my first actually working PHP script.

Since then I have advanced in PHP and currently work for a few companies as freelancer. I get a lot of work assigned through my dad's company as he has clients that are in need of websites and he doesn't have time to create them.

Since July 2014 I have started developing my websites in NodeJS rather than PHP as I find that PHP is too old fashioned and things can be done faster and more efficient in NodeJS. The NPM package manager makes it easier to include 3rd party applications into your own application and this speeds up development greatly.

6 With the GDPR, can I still allow our customers to store their member info? Apr 12 '18
1 Does hreflang and rel=“alternate” work with completely different URLs? Jul 22 '15