The reason I'm asking is, that I get a Clicks and Sessions Discrepancy warning in Google Analytics and the AdWords report in Analytics states the following: 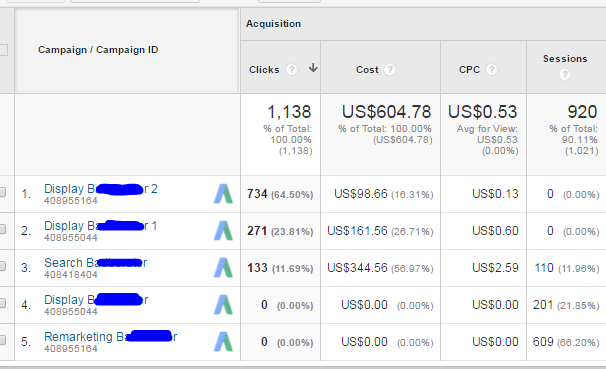 While search shows the usual discrepancy, all other campaigns either don't track sessions or clicks.

My guess for part of the discrepancy is, that there are no clicks recorded for Display (without number) and Remarketing, because these campaigns were renamed in AdWords and therefore no longer exist. Hence, when the data from AdWords is querried the response returns 0. Since there is a new Remarketing campaign (with the exact same name as the old one) you would expect new sessions, but this campaign has just been installed.So, the 0 is still plausible.

Now, on the flip side, Display 1 was originally named Display and inherited it clicks. These clicks can't be matched by sessions in Analytics as this campaing got paused after getting renamed.

Finally, I can't explain why there are 0 sessions for the Display 2 campaign. While this campaign also inherited clicks from its former name Remarketing, it is active now and new clicks (and hence sessions) should come up, but there are still 0 sessions recorded in Analytics.

Does anyone has an idea why that might be?

Browse other questions tagged google-analytics google-adwords universal-analytics click-tracking or ask your own question.