How to redirect to a mobile site that doesn't have a 1:1 ratio to desktop site?

I have a desktop site with loads of old Flash games on it. Since there wasn't any way of easily porting that to mobile, I have a completely different mobile site with a different set of HTML5 content options.

I've been through Google's documentation on mobile redirects (here: https://developers.google.com/webmasters/mobile-sites/mobile-seo/configurations/separate-urls) and it warns webmasters to maintain a 1:1 relative structure between the desktop site and the mobile site.

The thing is, that's not something we can do. The mobile site by definition must have very different content than the desktop site which has content that won't run on mobile.

So what are the best practices for mobile redirection? I'd like to just redirect all mobile traffic to the mobile homepage (as I can't really see any other option).

But Google cautions against exactly that: 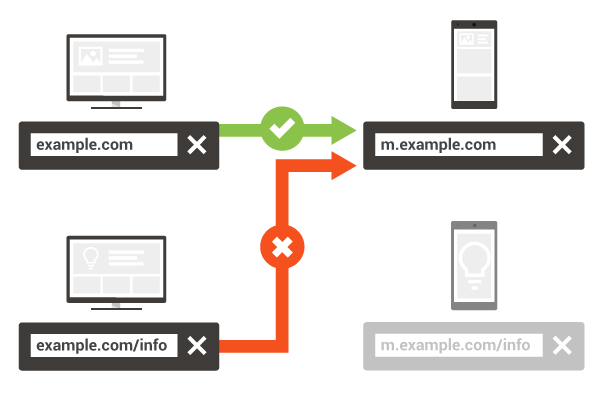 That above diagram of "what not to do" would seem to be "what I'm about to do", and I feel a bit strange preparing to implement exactly the thing they warn against doing. But I can't see any other options. Are there any special steps I should take to prevent that choice seeming like an error in terms of SEO?

(More of a collection of thoughts, rather than "an answer", but anyway...)

You need to think about what is best for your users.

Redirecting multiple pages to the homepage is not recommended simply because it usually gives a bad experience for your users. They find themselves on a page that is unrelated to what they have searched for.

You should only redirect if you have something equivalent to redirect to.

I have a completely different mobile site

I have a desktop site with loads of old Flash games on it.

The above is not at all recommended because this is considered as a soft 404 by google and hence would downgrade the seo performance of the pages. As google says redicrection from Page A to Page B should be meaningful i.e. the content is same only the site structure has changed and still the same content is getting served.

Having one to one mapping between desktop and mobile - Good Practice

Ideally you should have one to one mapping as in if a page exist on example.com it should ideally exists on m.example.com though the content might differ

Example : On desktop you might present flash games while on mobile it can be html5. Goolge won't penalize you for that. Rather this is recommended practice to make your mobile site lighter than desktop.

Also having one to one mapping i.e. a page A on mobile as well as desktop is important to let users on all device platforms access your site.

The main thing is that if Page A on Desktop is serving content A then on mobile also it should serve content A, the representation may be different , the content may be a sub part of what shown in desktop but it should have same meaning to the user/crawlers.

If you are planning to create 0,N pages on mobile out of N on desktop rather than complete set

In this case if you are planning to create a html game-a on mobile similar to desktop flash version, then an apple to apple redirect would be preferr ed:

Since the content does not exist at all on mobile, you can redirect that to home page

1
Should a mobile-only site use robots.txt?
4
Will ranking be affected with a mobile XML sitemap for a mobile site with the same URLs as the desktop site?
5
URL for separate mobile site
2
Canonical links and non-identical content (mobile / desktop)
2
Mobile Redirect vs Mobile Responsive for SEO
2
Linking desktop and mobile pages
0
Why does Googlebot-Mobile crawl desktop content?
3
Does mobile site need SEO while desktop site already does it?
4
How to define an URL in Article schema on mobile domain