How to inform a search engine about the text in an image?

I have an image file that contains several sentences of text and an illustration.

How can I inform a search engine about the contents of the text in my image?

I can't use the alt attribute as the text in the image is longer that the maximum words limit that search engines allow for the attribute.

If you have access to the source then you could consider using SVG, that way Google can read the text. – from Simon Hayter in comments

If you just want the text indexed for search engines and don't care about accessibility, then you can add a caption to the image in the sitemap:

OP edited the question to mention alt was not possible. If you've got that much text in an image, I'd seriously consider removing it from the image and placing it in the HTML normally.

Use the alt attribute:

Google indexes this as part of the image.

You should note that the text around your image is correlated with what your image is supposed to be, so perhaps the best way is to add a summarize of your content text (the one inside your image) just near your image. Also try to use rich anchor text (with keywords summarizing the main semantic of your image not all the text) to link to your image. Then you could also include /create rich meta tag direct in your image file, as it is possible in software such as acdsee.

In addition to the alt and longdesc attributes, the image can include the text embedded in it using XMP, IPC or EXIF fields. These can be added quickly and easily using many photo editors, including free apps and some websites. Completing the License field with a license allowing reuse will encourage others to copy the image and attribute it to your website or webpage. 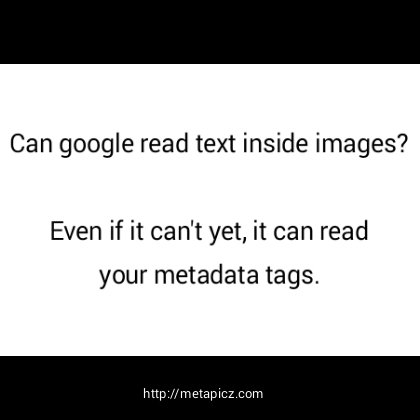 Metadata tags with or without structured data Just add <meta content="Turing's universal machine was built at Bletchley Park, England, and was actually named..." />

To add this as structured data use http://schema.org/ImageObject which allows you to specify a license and author as well. description can include the text, and keywords can add further context.

SEO depends on if a web or image search is used

Example: 19 word quote, searched for without enclosing in quotes and as a web search

The top results are images from pinterest and tumblr, followed by whisper. One of the top pins for the words above is which using pinterest's Visit Site gives the original source as a blogspot blog written in Jan 2015- which linked it from tumblr. The original tumblr link no longer displays on the blog (or tumblr). But the image has still got the top SEO for that phrase in only 8 months.

From looking at my own site this means an Images search with relevant text and/or phrases from the text in the description field will make the image rather than the page rank highly on google. For web rather than image-only searches pinterest.com combined with the alt property/tag produces very high SEO. Pinterest uses alt by default to describe your images, so each pin associates your image with that text (users can change this when they pin it though). Including the text in the alt on a very high ranking site like pinterest is important for SEO. Either pin all images yourself, or create very pinnable images, users in Pinterest can click the image directly to visit your website.

Add the text to the image's filename SEO

In the example quote above after excluding social media images the top two results both came from images on from a page that including keywords from the quote in the page's name - http://moviezmagazine.com/2014/10/sometimes-people-one-imagines-anything-things-one-can-imagine-imitation-game/ - a similar way of naming images would increase SEO. Google's naming advice confirms this, the filename is readable even if the text isn't (yet).

Pinterest works well for referrals in, but will involve multiple copies of your images appearing all over the web- regardless of any license you set. Since we are talking about text within images this should be less an issue then doing this with original art which is for sale.

You can provide a 'pin it' button which searches for your existing pins from the page rather than creating new ones. I don't recommend uploading images directly to pinterest because this won't link them to your website - instead pin direct from the site and verify your pinterest account. This should gain followers for you, and will notify them every time you pin a new image - so new images should increase hits to the page very quickly, and rise in SEO rankings quickly.

It seems likely that in time google will be able to read text inside images, just not quite yet.

Not the answer you're looking for? Browse other questions tagged seo images google-image-search image-search or ask your own question.

22
Do search engines index text contained in SVG elements?
4
Does Google OCR and index text in the images?

21
How do I get images containing text to be indexed by search engines?
1
Image SEO with overlaid text?
7
Are images with non-standard extensions (such as ".ashx", instead of ".png" or ".jpg") bad for SEO?
0
Google image search and data-image attribute
1
Inserting <img> into <a> with the same image and SEO
4
Should it be beneficial to put dot (period) in the end of Image Title tag's text or ALT text?
5
When linking to an image as "download", get other text associated with the image for Google image search
1
How important is writing unique text for each image when bulk uploading images of a subject to my website for image SEO?
3
Does an image post or a text post have a better chance of ranking in Google?
3
Is it better for SEO to use alt text or "screen reader only" text to describe an image that has text on it?