I'm a software developer, and I'm trying to publish some open source software on my site. My software is designed for Windows users, so I want to use a single file "setup.exe" or something likewise.

I currently have a test application and I've created an installer with: "Inno Setup 5" (I'm not attached to that program, so if you know a better one I'll try that) and published it on my site (here).

But when I try to download it chrome says:"setup.exe is not commonly downloaded and could be dangerous." this scares away people, and I can't have that. And when I do confirm that I want to keep it (by clicking the small arrow on the side) and I install it, Windows (SmartScreen) says:"Windows protected your PC".

I need to get rid of both these errors, and I can't find a working solution. Please help.

Particularly on windows there are some nasty looking warnings about running installer exe's. These can be made much less scary by signing your code release. We make sql charting software, with our setup.exe you only get this one warning: 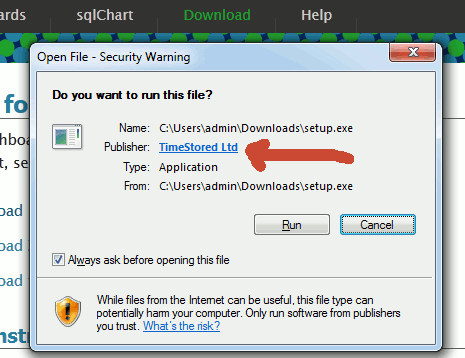 Notice where it says publisher, this means the user gets less warnings and seems safer. I say seems as the only requirement is paying $80 in a process similar to registering for DNS. The cheapest certificate seller is probably Tucows: https://author.tucows.com/index.php?action=auth&redirect=certs.php

Simple answer. You are going to have nothing but trouble with a file name of setup.exe. In fact, any file with the .exe extension is going to ruin your day. The good news is, I am pretty sure your not a hacker! (humor) Use WinZip or some other compression file application and create a .zip file with your install in it. Have your users download the .zip file instead. That should be good enough. There should be some free compression file tools out there that are pretty good. I have been using WinZip since forever but I know there are others just as good if not better for free.

Could be several reasons but more than likely that the file has not been scanned by Google. This a commonly asked question on several media sites and below is a snippet from a similar question being asked on Stack Overflow.

I had exactly this problem with an exe file that is downloadable from my web site. Whenever I tried to download the file using Chrome it gave the warning.

The solution I found was to sign up to Google Webmaster Tools and add my site. It took several days for Google to crawl my site, and fill in any information, but I went back today and finally found loads of information there.

Now I can download my file, and there is no malicious warning any more.

It seems that once Google has checked out your site and determined that you are not a bad person, the problem goes away.

We are a software developer and we had the same issue. Our products are packaged as installer EXEs and then hosted on our site. All our EXEs are digitally signed by our code-signing certificate issued by Thawte CA. Our website has been registered with GoogleWebmasterTools (GWT) since 2011.

Initially we had our hosted our EXEs and they were being downloaded fine by our users. On Feb. 28, 2015, we made new EXEs incorporating some changes. These new files were incorrectly being flagged as "not commonly downloaded and could be dangerous" by Chrome on Windows till Mar 03, 2015. These files were being downloaded with no issues on other browsers. Antivirus products were also not flagging them as malicious. At sometime on Mar 04, 2015, the problem resolved itself.

The code-signing certificate was the same across the two generations of EXEs and we were actively monitoring GWT for any warnings/issues but there were none.

I believe, as others have already pointed out, that this issue is caused from the delay between your content being updated on your website and Google's searchbots indexing it.

My advice is to follow a staged rollout of new EXEs -a few users are served with new EXEs for a limited time frame (about a week), while the remaining are served the old EXEs. This gives search engines time to index the content and flag it appropriately. Your users also have a "safe" download to fallback on on. After about a week or two, you may remove the old EXEs.

Not the answer you're looking for? Browse other questions tagged google-chrome windows java publishing or ask your own question.

1
How to refresh server caching dynamically when we have the web application running in clustering environment?
1
Azure Publishing
4
Publishing a web application with Linode
4
What is the ideal publishing workflow for an enterprise CMS?
2
How can I fix the #c3284d# malvertising hack on my website?
1
Web page stopped working correctly (with a publisher error). What might be wrong?
4
Publishing content in bulk vs publishing periodically