I'm planning to release an open source cms and I wonder if there is a way to know if people use it. I added this line to CMS templates:

I know that generator meta tag can be easily faked or removed, but it'd still be great if search engines would consider this info to provide "Powered by" statistics for web sites.

Does anything similar exist?

--Edit: the aim is to know how many and which web sites use the cms. I talk about generator meta tag because to me it could be used for that. Eventually I'd be glad to know if there are alternative approaches.

I imagine it'd be relatively easy to create or license some really useful feature (and if desired you could obfuscate it in base64 encoding or whatever) that would load a small resource from a server you monitor.

Things like this are really common in analytics (the smiley face for WP-Stats) and tracking features. For instance, if you have ever used something that let's you track if email messages have been opened, they generally include a 1px by 1px transparent 'tracking pixel.'

Sure it could be removed but if you come up with some neat feature that people find valuable there's a good chance they'll leave it.

Along those same lines, you could implement some standard practice. WordPress requires themes which meet their coding standards to have certain CSS classes. On a smaller scale, I suspect something like that would be easy to crawl and/or search.

Also, if I found a CMS I liked and in the README the creator asked that I send him an email (or a tweet, etc) whenever I launched a site built on the CMS I'd likely do so.

I can't speak on the generator meta tag but hopefully this gives you some alternative ideas.

The site http://builtwith.com/ offers statistics about how many websites use various technologies. They gather this information by downloading pages from websites and looking at items such as:

For example they have the following report for WordPress: 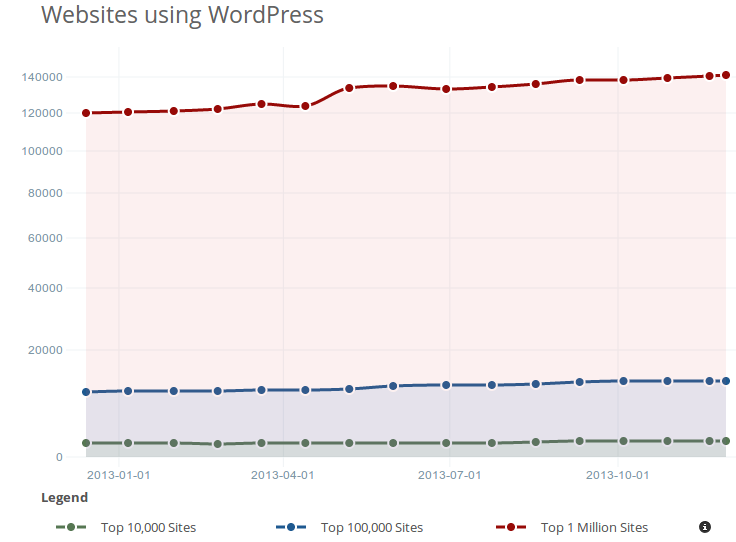 They also cover technologies such as:

If they don't currently cover your CMS, you can suggest to them that they add it.

These Meta elements provide information, which can be used by search engines to categorize sites correctly. Meta descriptions, for example, appear in Google search results to describe the links. For the content generator, I would not expect the search engines to use it, but at it won't harm anything.

Some information which also could be usefull you can find here.

[…] identifies one of the software packages used to generate the document.

So it’s appropriate to use it for pages created by your CMS.

Some also send a HTTP header, e.g. X-Generator (like Drupal does). Same caveats, although probably not so many users will remove it because most wouldn’t even notice this header.

Many CMS include a "powered by" line in default/contributed themes.

This would allow you to search for pages containing your "powered by" line (see example search for Drupal).

A web bug (hosted on your server) included in themes could be used to get Referer data (i.e., the page adress itself) of the page’s visitors.

If your CMS offers the functionality to automatically search for new updates on your server (it should!), you could use these statistics.

If you raise statistics that way, you should tell your users! (And probably offer an opt-out.)

Not the answer you're looking for? Browse other questions tagged search-engines meta-tags service usage-data or ask your own question.

11
What's the meta-tag title for?
0
Are there any stats for local Google v. Google.com usage?
0
Free web "caching" services for a web service
0
Getting statistics on traffic sources for website usage
25
What's the fluid-icon meta tag for?
3
Usage of meta tag "generator"
5
Adding meta tag keywords - the same or different on all pages?
0
Include meta tag outside the HTML tag
3
Alexa-rank complaining about insecure generator meta-tag