How can I troubleshoot this problem?

The problem seems to be with Apache responding to requests, but previously I've only seen this behavior under 100% cpu load. Judging solely by resource monitoring, it looks as though very little is going on.

Here is the kicker - roughly half of the site's access comes from our LAN, but if I disable the firewall rule and block access from outside of our network, internal (LAN) access (1000+ devices) is speedy. But as soon as outside access is restored the site is crippled.

Apache config? Crawlers/bots? Attackers? I'm at the end of my rope, where should I be looking to determine where the problem lies?

Attached a waterfall chart from webpagetest.org showing a 15 second load time, I've seen times as high as several minutes. And again, the server runs fine much of the time. The green areas indicate that the browser has sent a request and is waiting to recieve the first byte of data back from the server. This is certainly a back-end delay, but it is puzzling that the CPU is barely used during this slowness. 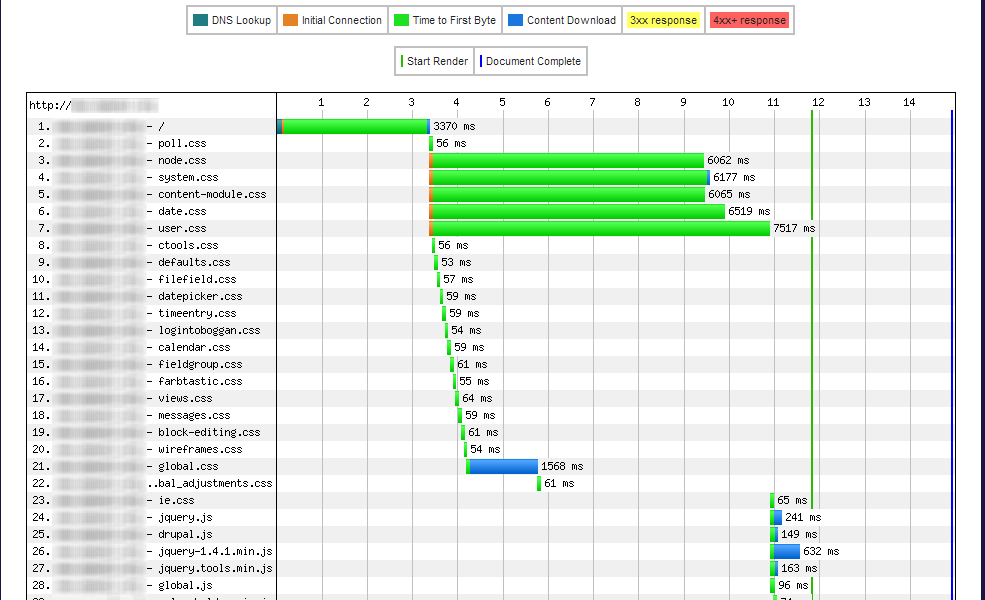 After much research, I may have found the solution. If I'm correct, it was an apache config problem. Specifically, the "ThreadsPerChild" directive. See... http://httpd.apache.org/docs/2.2/platform/windows.html

Because Apache for Windows is multithreaded, it does not use a separate process for each request, as Apache can on Unix. Instead there are usually only two Apache processes running: a parent process, and a child which handles the requests. Within the child process each request is handled by a separate thread.

ThreadsPerChild: This directive is new. It tells the server how many threads it should use. This is the maximum number of connections the server can handle at once, so be sure to set this number high enough for your site if you get a lot of hits. The recommended default is ThreadsPerChild 150, but this must be adjusted to reflect the greatest anticipated number of simultaneous connections to accept.

Turns out, this directive was not set at all in my config and thus defaulted to 64. I confirmed this by viewing the number of threads for the second httpd.exe process in task manager. When the server was hitting more than 64 connections, the excess requests were simply having to wait for a thread to open up. I added ThreadsPerChild 150 in my httpd.conf.

...which, among other things, allows one to see the total number of active request on the server at any given moment. Right away, I could see spikes of up to 80 active request. Time will tell, but I'm confident that this will resolve my issue. So far, 30 hours without a hiccup.

Not the answer you're looking for? Browse other questions tagged php apache mysql drupal or ask your own question.

0
Configuring `mod_vhost_alias` to server subdomain-based websites
0
What could cause my website to only be accessible via SSH?
1
Is there anything unusual or nefarious about private IP addresses in server logs?
0
Apache FollowSymlinks works in DocumentRoot but 403s in subdirectories
1
Apache 2.4: Symlinks to CIFS mount are served, but not seen by PHP or mod_autoindex