What is the typical example of old school website design? [closed]

Ask Question
Asked 10 years, 3 months ago
Active 6 years ago
Viewed 16k times
13
Closed. This question is opinion-based. It is not currently accepting answers.

I want to build a website for a retro thing that was popular in the mid 90s (beginning of the commercial internet).

So I want use old designs that was very popular at that time.

The first thing that comes to my mind was those "under construction" animated gifs. People often put animated gifs everywhere.

But also those awful repeating backgrounds.

(please suggest practical and usable features, I guess an Java Applet menu would not work today, or saying on the bottom that this website is optimized for Netscape 3)

EDIT: for those that wants to see the result: Retrology

How about how about Bruce Lawson's hilarious css zen garden contribution?

The "style" of an early to mid-90s website is basically a website without any style. It's plain to save on bandwidth as well as due to technical limitations of web standards (or lack thereof). Take Amazon's original layout (1995): 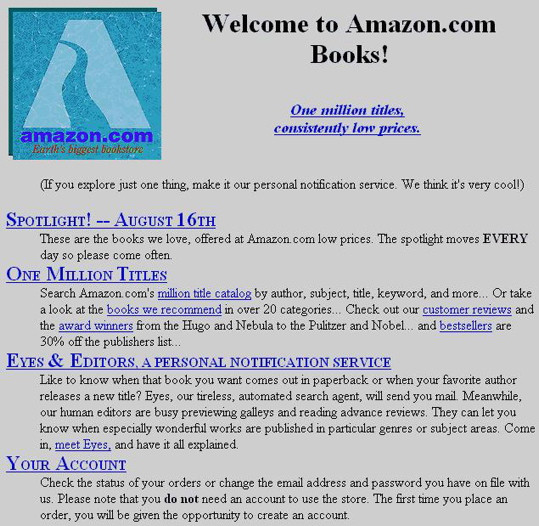 It doesn't have to be gaudy and with tons of animated GIFs or under-construction signs (they were a common sight, but not on operational business websites).

Another good example would be pets.com (1998-2000), which won a lot of awards from the advertising industry for their website design. But I can't find a screenshot of it.

Anyway, even though most of it would be considered poor design these days, there are still both good and bad 90s web designs. For instance, a grey background is pretty "retro", as are a 256-color palettes, 90s clip-art-style web graphics, and Times New Roman type face. Frames are a good throwback as well, as are gopher links and hit counters. But things like midi background music, clashing day-glo colors, stock animated-GIFs, etc. are more characteristic of poor designs than 90s web design in general.

You can take a look at my home page, I did it up very mid-90s. Use old style HRs footers with last updateds are good, that gray background browsers used to have by default. Old style browser icons. Animated GIFs were novel and were all around.

If you're planning to make a "personal homepage" throwback, forget about using any of those fancy "cascading style sheets" - you won't need them.

Open up your favorite WYSIWYG editor (Microsoft Word will do in a pinch) and throw together something with plenty of colorful text and daring use of fonts (when in doubt, go with Comic Sans).

Remember to use graphics with a "web safe palette" and, yes, you'll be needing plenty of animated .GIF's.

If you want some examples of how business sites looked, however, you're probably better off picking the names of a few brands which still exist today and visiting the Wayback Machine.

First site that comes to my mind is http://webpagesthatsuck.com/

Look into old school category. By the way, this site is awesome as its proposal: learn design through what NOT do samples.

Oh you are just gonna love this.

Use the internet wayback machine at http://archive.org/web/web.php. You can search for any site and see a timeline of how it's evolved over the years. Classic examples would of course be Yahoo, Google and the like but you can also pick a blog like Scobelizer, etc and watch how it evolved.

If you know your browser history milestones (Netscape, IE 5, Mozilla, Firefox, Chrome, webkit) you can look at those dates and watch how sites evolved to pick up the new functionality.

There are few things that I remember :

For the last point Geocities doesn't exist anymore, however they are some website re-hosting the geocities content. You might want to take a look at them for more ideas.

Use a Courier font. It's really reflective of the 1950s, but it really feels old.

Interestingly, I think you can achieve your objective without purposely shooting for the ugly stuff, sort of like a classic car that isn't a Pinto. It's not as nice as the new stuff, but you can appreciate it within the context of the day.

Some things I recall:

Make those low resolution images, made of MSPaint or something! Sidebars with low-res gradients would work too! Annoying bright colors, as well as tons of flashing gifs with very slow development and looped advertisements are definitely shouting "internet @ 90's". Wow, I suddenly felt nostalgic about the old days after looking at Pierre's link. I wonder how it would turn out if one of today's most popular social networking sites were developed during the 90's. Imagine FB, looking like a site from geocities LOL.

Don't forget to have some sort of javascript thingy that follows the cursor. Maybe a pair of eyes, some snow flakes, whatever.

And was that the period when autoplay midi files happened?