Why would a Google AdSense application be rejected due to illicit drugs on my blog?

According to Eligibility to participate in AdSense one needs to own a website for at least six month before he can use the AdSense service by Google. In some people's experience the same does not apply to blogs (especially blogger).

So in order to test the process I performed a small experiment. I created a blog with a single post that contained some random IT related jokes taken from the internet and within 4 5 hours applied for an AdSense account through blogger. As expected I received a mail from Google on the same day saying that your account could not be activated. I was expecting them to say something like "your blog should be at least 6 month old" or "No original content found" but the reply was shocking. Here's the screenshot of the received mail. 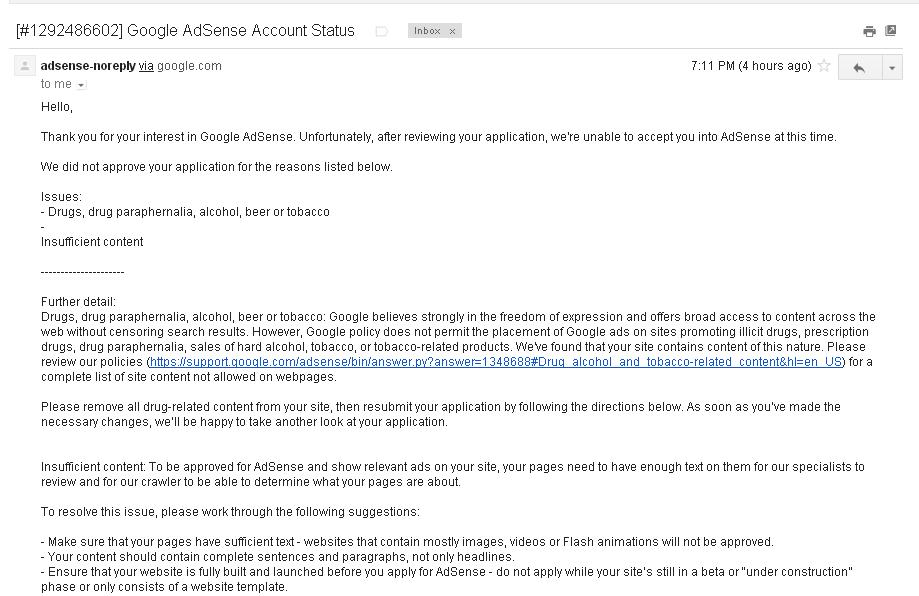 The very first reason that they gave was that the site promotes illicit drugs, prescription drugs, drug paraphernalia, sales of hard alcohol, tobacco, or tobacco-related products. The second reason- insufficient content is a valid one but I wonder what could be the reason behind this this kind of weird reasoning?

This is not the complete screenshot the rest of the email discussed that there was not enough content and had links to Google's policies.

Much of the verification process is automated and as such can throw false positives. I was tasked with adding AdSense to a health services blog and it was denied for sexuaally explicit content as one of the blog posts contained the word "sex", the overall blog article in question was around men's sexual health and was in no way sexually explicit as it was designed both with adults and high school kids in mind but it was still denied for that reason. I had to make contact with Google and specifically have a special authority done due to the automated filters believing the site to be sexual in nature when it was actually a health related site.