I was looking at the new Smashing Magazine design and first of I have to say, it looks great.

One thing that grabbed my attention though was that the Right Hand Side adverts get dropped during the 'first stage' of the site shrinking down to a more mobile friendly version.

Obviously when the ads are referral based the only people that are getting hurt are the webmasters that made the change, but what about when advertisers are paying for a certain slot.

If webmasters decide to make their sites act responsively (and I think we should) should we be selling ad space per window size?

I also wonder if there has been any examples of people maybe going from banner / image based adverts to text based on smaller window sizes?

A lot of this comes down to the advertising contracts you're using on the site. I've not really looked into GoogleAds (for example) so can't comment on that, but I've worked on a number of sites where they've used ad delivery systems that they've controlled the rate cards for.

Also with a pay-per-click or pay-per-view rate card, you would factor in the fact that the ads might be displayed for a longer period to reach their goals.

Some sites already offer options on having "Sponsored Text Links", and these could be shown on either full size or small designs as needed.

Note that although the bulk of the adverts on Smashing Magazine are in the Right Hand Side they do also have adverts in the main stream of stories and at the top of the articles, all of which stay in place as the window shrinks: 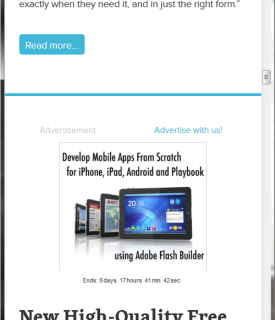 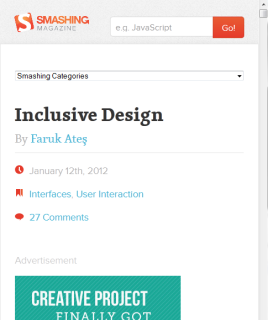 Not the answer you're looking for? Browse other questions tagged advertising responsive-webdesign or ask your own question.