Why isn't my website in Google search results? [duplicate]

It's been sometime and Google has yet to index my site. How can I get Google to index my website?

This is not uncommon as there is no time frame for Google to index a website. The best thing you can do is to give Google every opportunity to find you.

Try all of the following:

Additionally, your site may be partially indexed but not yet ranked, you can check this by doing the following search command in Google Search: site:example.com.

Google periodically scan web. Might be your site is not scanned till now.

Don't forget the concept of domain aging either. If you slap up a new site on a brand new Domain name, expect Google and the others to de-emphasize it for a time period of at least several months. This doesn't explain flat out omission as you're seeing, but it does explain why it's incredibly uncommon to see a site shoot directly to the top of the search rankings.

I've had sites that I put a ton of time into not make Google for several weeks or even a month and I tried every (ethical) trick in the book. Eventually, they get picked up and because of all the extra work I did, they moved right up the page in a hurry. I personally subscribe to the idea that SEO is not rocket science, and the only people who REALLY know exactly what will move you up is Google and they're not telling. Google will put you on when Google wants to, provided you make every effort to make their life easier. Bing in my experience has been faster; go figure.

My most successful clients actually get more traffic from social media. If you really need traffic, try promoting yourself consistently everywhere you can (but don't carpet bomb forums, because that's annoying!).

While you're waiting for it to get indexed. Do a W3 check. Take a few days to do extensive testing add a cool new feature you've not gotten around to writing yet. Analyze and add to your (Google discoverable) content buy your significant other dinner, walk the dog.

Not all of the pages get crawled - Google does not look at everything.

Use the Fetch as Google tool to fetch and then index the missing pages.

You should also submit a sitemap to Google Webmaster tools.

Add all variations of your site to WMT

While the site address move tool may not treat protocols, url changes and sub domains as new sites, the rest of Webmaster Tools does treat protocols and sub domains as separate sites. You should add all variations of your site, below is an example of my site BYBE added to WMT with all variations, you should do the same. (recommended by John Mueller from Google, See comments below this answer). 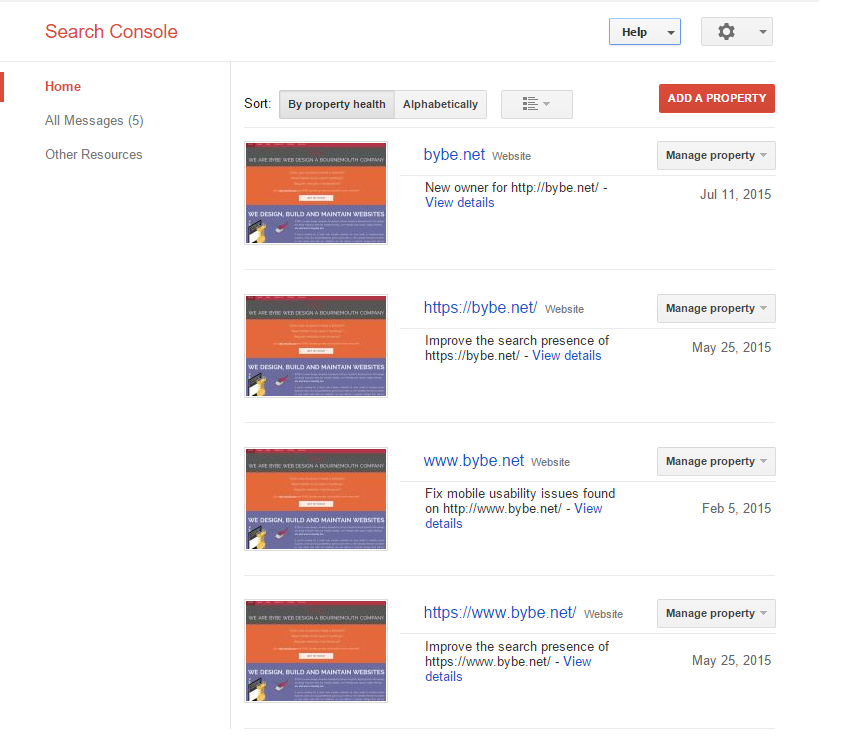 33
Why aren't search engines indexing my content?
10
How long did it take for your new website to be indexed by search engines
6
How long does it take for Google Webmasters to index site after submiting sitemap?
0
A relatively new blog seems to be getting very poor Google indexing
0
Google doesnt list my website
1
Major Indexing problem with my site
0
My Blog not not showing in Google Search Results
0
Google indexing not working
0
Site Indexed in Yahoo and Bing but not Google
0
How to Index my website?
See more linked questions

3
Why are new pages not being indexed and old pages stay in the index?
7
Why is Google still not indexing my #! website?
57
Another website is mirroring and ranks above my site in search results
7
Index status shows significantly less pages than search results? *Not a New Site
3
Google search console shows that a version of my domain that isn't preferred and isn't indexed still gets some search traffic. Why?
0
Google Search Console index urls of an unknown website
2
How to stop google from indexing spammed internal search results?