Why is Gmail showing the word 'Unsubscribe' in email subject lines?

I have recently noticed that when I send out e-mail campaigns that Gmail is now including 'Unsubscribe' in the subject along with my actual subject. Is this now a common practice among e-mail providers or is it just Gmail?

Nick was 100% correct and I have made a few changes I decided to post:

I did not want to change my layout any and keep it the same yet Google pulls the first text it sees which was ALT text for an image. To correct this I inserted a 1x1 Transparent Picture with the ALT text that said what I want the Gmail Preview to say. Works like a charm.

Here is the code for it:

I put the color there to ensure the text blends in to the background because I do not want it visible in the e-mail for users who have images disabled.

It sounds like Gmail is picking up the word 'Unsubscribe' from the opening line of your email newsletter, then displaying that in the message preview to the right of the subject line.

The text I've outlined in red is the message preview in Gmail:

Here's where Gmail pulls that from within the email itself: 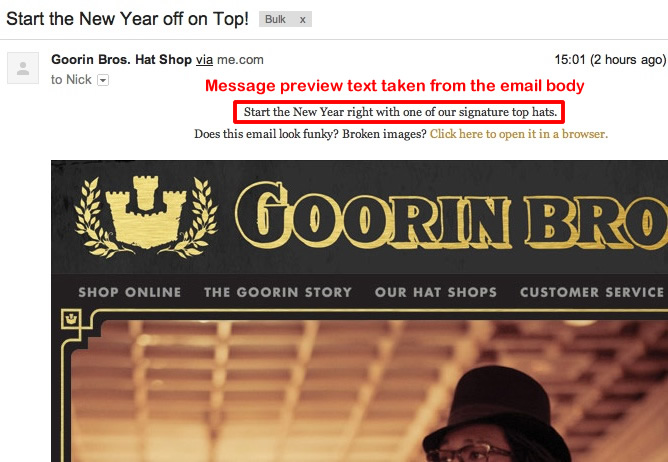 As you can see, the opening text of the email determines what Gmail displays as the preview.

You don't say in your question, but I suspect the emails you're sending begin with the word 'Unsubscribe' in the header, as seems to be common with off-the-shelf newsletter templates. The solution is to edit the newsletter template to put that unsubscribe link in the footer of your email instead of at the top.

You could then put something more welcoming at the top of your emails instead of 'Unsubscribe' -- a short summary of the email content, for example. This will likely boost your open rates and reduce your unsubscribe rates, as well as proving less confusing in Gmail, where the subject line and message preview appear to run together.

3
Why is an email failing RFC2822 specifications?
4
What is the maximum frequency for checking email in Gmail, and are there alternatives?
3
Email forwarding to Gmail accounts instead of maintaining a mail server?
3
Gmail flags email as spam if it contains link to my website
3
Mailchimp emails are not delivered to gmail or google app based email addresses
2
My email is being marked as spam by Gmail and Outlook, why?
4
Gmail suspicious link message on my email links
4
GMail incorrecly marks solicited emails as spam when sending with Amazon SES and PHP List
2
Importance of "List-Unsubscribe" header in bulk email