Summary:
My site is ranking for filthy keywords and i would like to remove them from google ranking/keywords.

My server was hacked using the timthumb exploit/security vulnerability, apparently i was the last person on earth to read the news about the exploit, several months after it appeared.

Anyway, the "hacker" was so friendly to modify the index.php file in such a fashion, that it generated random sexual oriented keywords if the website is fetched as Google-bot. So if you would fetch it as Google bot/it gets indexed, you would get randomly generated keywords like:

I've discovered it far too late, so that Google had me indexed for the words "sex" and certain adult oriented keywords, about roughly 2000.

I've removed all the content, toke the site down, replaced the index.php with a static HTML and added a "ERROR 410" title to the website so that the content is no longer here and removed permanently.
I've also applied for a manual review of my website, about 1.5 months ago but still, the keywords are there, and very strange, some of the keyword rankings actually "improve" over time.

Here are some screenshots from webmasters tools: 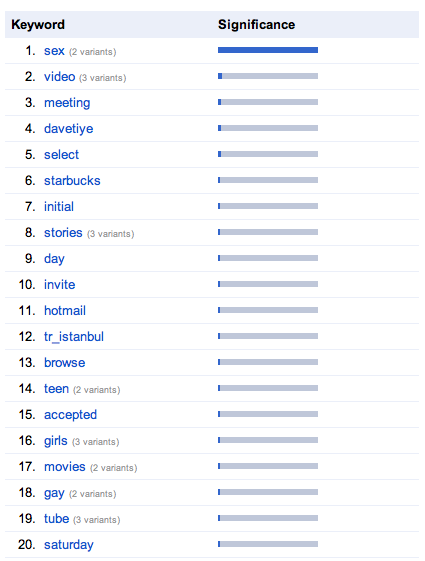 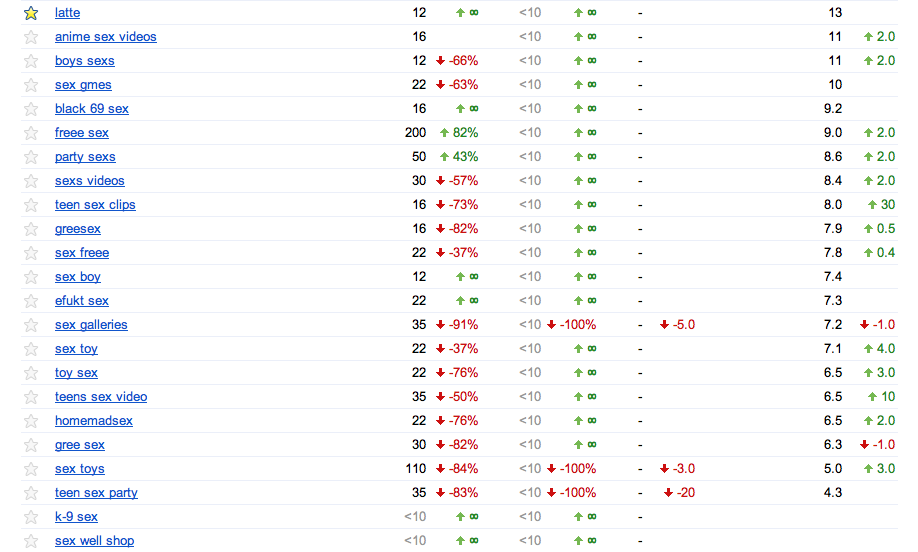 Please help me or point me into a direction. Thank you

After removing and blocking the content for a time, i let ALL content return a 404 and after about 2-3 Months (maybe longer) of no movement at all, one day google magically removed ALL offensive keywords from the keywords page so these f$#!ing keywords are now gone for good!
I hope this can be of any help to you web masters, thank you!

From the sound of it you have taken down all your real content and only left the index page. This is probably one of the worst things you could do because Google is not able to refresh the content and keywords on those pages. You shouldn't return a HTTP status 410 either because that implies the content will never be coming back (although I believe Google currently treats it the same as 404).

You should make sure your site is secure again and if possible restore all the pages to their previous state (with the updated, secure timthumb and Wordpress). Once the site is back up and all traces of the hack are gone it will only be a matter of time before Google revisits those pages and picks up the proper keywords again.

You can speed up the process by increasing your crawl rate in Google Webmaster Tools. By "manual review" I'm not sure if you mean the "reinclusion request" from GWT but is a useful thing to do if you have lost rankings.

Not the answer you're looking for? Browse other questions tagged seo google-search-console google-search keywords blackhat or ask your own question.

5
Remove home page from Google cache
2
Remove all results from google search and restart from scratch
1
Content keywords are incorrect in Google Webmaster Tools
2
Remove hacked URLs from Google Search
1
Site was hacked months ago. How do i remove created pages from googles listings
1
Know which keywords google has associated to my website
2
Google DMCA removal - proper way to react to avoid being de-listed from SERP
1
What if Remove page from Google index after the new search console update?
3
Best practice to remove a full website from Google and Bing search index