What's the most popular programming language for creating websites?

I want to know the details of websites developed using the different languages like .Net, Java, PHP, Python. Which programming language is mostly used?

TIOBE publish a monthly league table of the most popular programming languages. The four you mention are currently ranked in the following order:

Note that the TIOBE tables are based on an algorithm that tries to determine the number of lines of code written in each language every month using results from the major search engines, so they're not necessarily an indication of the number of websites using those programming languages, but it probably gives a fair indication.

What it doesn't take into account is the number of websites deployed using off-the-shelf blogging packages and CMS such as WordPress etc. If it were possible to count the number of active websites using each programming language, I suspect PHP would come slightly higher than the popularity table suggests.

Netcraft also surveys millions of sites every month to determine what server platform they use. The latest results available to date (July 2011) won't give you a precise indication of the underlying programming language (only the web server), but it serves as a useful reference point: 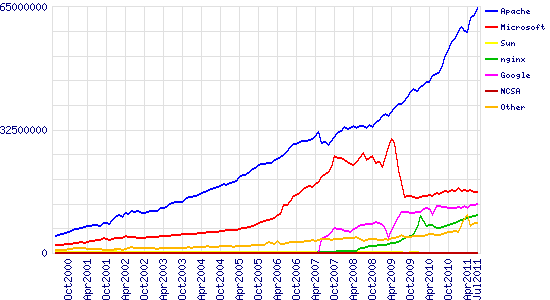 Data on programming language use among active websites is very hard to come by, largely because it's not always obvious from generated code and server responses which language is being used. As such, it's hard to tell what language a site's written in without asking.

PHP is the most used by far. The fact the entire stack is free helps but it gained its popularity because of the ease of integration. It is extremely easy combine static HTML with PHP or even add features to a static side.

There is also a huge volume of general-purpose platforms written in PHP. Think that every Wordpress-Powered blog or site is a PHP site. There are tons more and plenty of others are hugely popular.

It turns out that the most popular is different from the most used depending how you count. For very large and complex sites, people tend to prefer something more structured such as Python, Java and C++. Often, the largest sites will use a combination of languages.

For historical reasons, certain languages get adopted at different rates depending on the domain. For example, after PHP, content sites often use Python. Banking and service sites are more likely to use Java. C++ and assembly is often used to boost performance in key areas but I have not seen any (there probably are some though) written entirely using these.

PHP is mostly used in web development and Java & asp.net are also popular.

Not the answer you're looking for? Browse other questions tagged web-development or ask your own question.

2
Does the top level domain I choose for my domain name affect the features I can build for my site?
1
What's the best way of going about creating a website that serves the purpose of being a programming language reference guide?
1
state of art paradigm? 1 website for browser and mobile or 2 different websites
2
understanding technology that news websites use