Possible Duplicate:
What Forum Software should I use?

I'm currently using vBulletin along with a bunch of plugins like vBSEO, shoutbox and others for a sports discussion site. I just don't have the time to keep up with the upgrading of the vBulletin software (and then all the plugins). And I'm not crazy about vBulletin in general. Last I checked there was no good single sign on mechanism to integrate it with other systems and the social aspects of the site, of which discussions are really all about, seem lacking.

Are there good alternatives which are easier to manage (ideally hosted systems), easier to integrate and more social? I'm more than happy to pay, but this community is only about 4,000 strong... so anything above a couple hundred $$ per month will have to be pretty spectacular.

check out ForumMatrix to compare forums. It will let you search numerous features and compare the results against each other. 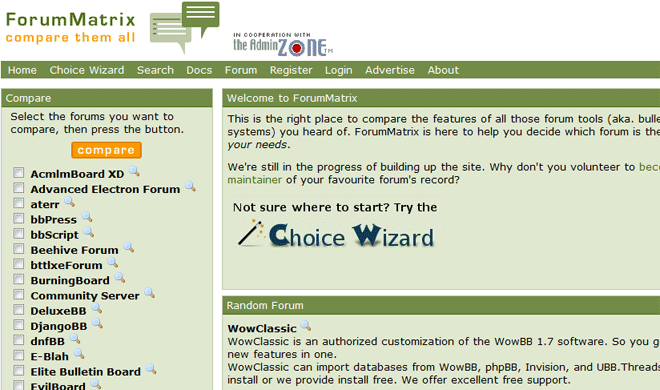 I've used vBulleting since Fall of 2000 on a number of sites as large as a few hundred thousand members. I still used it today. I'm not bragging, just giving you some background.

While my suggestion is not a hosted solution, I highly, highly recommend XenForo. It was created by most of the original developers of vBulletin. They left vBulletin due to disagreements after Internet Brands acquired them.

I'm not using it yet, but am closely watching its core and module development. It's everything that was good about vBulletin without as much of the bad. I don't know if you are running vB4 or have tried to used their mobile suite, but they are releasing products with major bugs now and have had at least one major security gaffe. I won't touch vB4 with a ten foot pole.

The UI is impressive. You'll notice it just by navigating around their community forum. The theme system makes it much easier to modify the look of the forum. It is much more social out of the box with news feeds, trophies, and a like system. It offers sign on with Facebook, possibly OpenID, Google, Twitter, Yahoo, etc. in the future or with a mod. I imagine the upgrade process has been improved as well.

Someone has already solved the very important issue of switching over from a vBSEO site to XenForo and redirecting all the old URLs: http://xenforo.com/community/threads/redirects-for-vbseod-urls.5098/

Let me know if you have any other questions!

I would recommend Vanilla Forums. Simple, easy to use and not all the bloat that comes with vBulletin and it's open source.

My company, Ninja Post, is a hosted forum solution that integrates with your URL (e.g., "forum.yoursite.com"). Ninja Post uses OpenId (Google/Yahoo), oAuth (Twitter), and Facebook Connect for user registrations. In addition, threads update in real time, like a chat so there's no need to constantly refresh the page to check for new posts.

You could set up a wordpress site with a bbpress forum. They're very good at trying to simplify the upgrade process.

I've predominatly used phpBB but I don't think this has much over vBulletin.

Not the answer you're looking for? Browse other questions tagged looking-for-a-script forum vbulletin or ask your own question.

17
What forum software should I use?

0
How do I prevent spam in a vBulletin forum?
3
GitHub forum/helpdesk solution
2
How to modify the CSS in vBulletin
1
vBulletin 3 spam solutions
2
Vbulletin on nginx?
4
How to add iframe to vbulletin?
1
How to be alerted by email when new vbulletin version is available
1
How to delete every post of a specific user from VBulletin?
0
Weird characters appear in Vbulletin after moving servers. ( don't appears as donâ€™t )