I need to come up with a regular expression that matches all page paths that:

google-analytics regex re2
Share
Improve this question
edited Jan 26 at 16:01

Google Analytics uses the RE2 flavor of regex.

First, I'll go through some examples to lay down the building blocks. This will help you understand. After, we'll put it all together to create a solution that captures all urls with the paths you've specified.

This regular expression will match all urls that have a path starting with /foo/ and ending with /bar.

Here is how it works:

Important to note is that the above expression does not control for more than one path between our targeted slugs. So what can we do?

This regular expression helps avoid the pitfalls of the last one allowing us to get a successful match even if there's more than one sub-directory between your start and end.

How this one works:

If the idea of "escaping" in the previous example sounded confusing consider this:

In my second bullet above I had to escape the * so that it didn't create two bullet points, since our markdown permits it in addition to + and - ) when creating unordered/bulleted lists.

Unescaped, I'd have this:

To reiterate, you need to match urls with paths that start with /google+redesign/ AND end with /quickview. Since there's a + that will need to be escaped.

Here's a couple ways using both of the approaches we've taken so far: 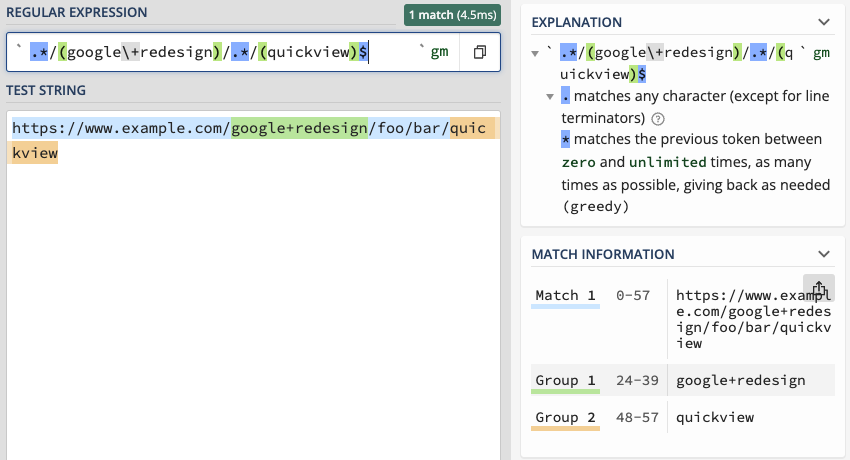 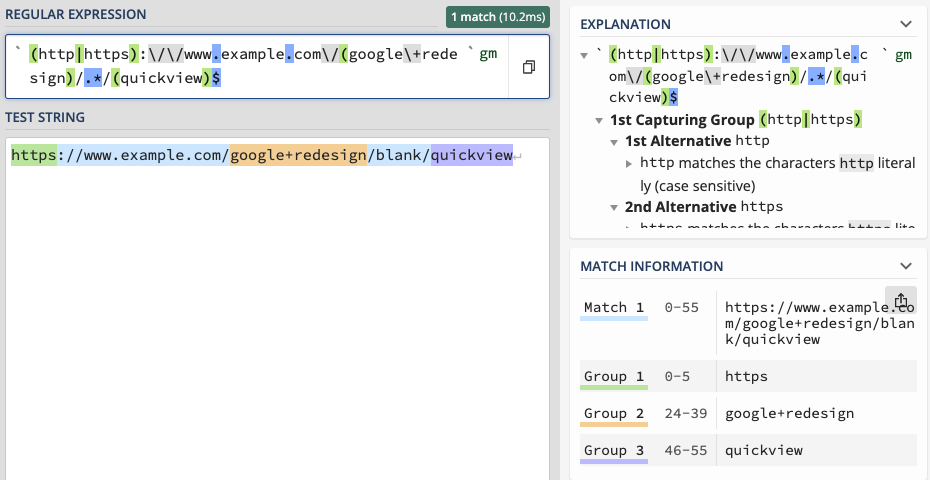 You could also replace your first capturing group with a "non-capturing group" if, for example, you don't care about the protocol (http vs https):

By including the ?:, in our first group becomes non-capturing. The parser still uses the group to match the text, but it's ignored later in the final result.

Hopefully this helps. Regex is super confusing to wrap your head around when you're just diving into it.

I recommend using Regex101, it is a fantastic tool to use when constructing regular expressions. It will also help you learn. It defaults to PCRE, but you can switch to RE2 by selecting Golang on the left hand panel. The Go Programming Language uses it.

Not the answer you're looking for? Browse other questions tagged google-analytics regex re2 or ask your own question.