I have worked with Google Search Console (GSC) and Google Analytics (GA) for long enough to know that organic GA traffic to a specific page is typically higher than GSC traffic to the same page.

However, until now, I have never come across the reverse situation.

One of my clients is a recruiter. We recently made a change to their job board and were excited to see in GSC that the number of clicks to the individual jobs had jumped dramatically (screenshot).

When I run a custom report in GA (screenshot of parameters), I see far fewer clicks to the same page type (screenshot).

I've tested GA and as far as I can tell, it is working but I guess it's possible I am missing something. Alternatively, is it possible that GSC's data is inaccurate?

Any thoughts would be welcome.

Google Search Console uses Clicks which will count every time a person clicks on your results in the SERPs, regardless of whether it is the same person or if there are multiple clicks in a short period of time.

In your Google Analytics custom report, you are using Users, a calculated GA metric based on a single identifier (Client ID or User ID).

How can we explain the differences in your reports?

In summary, you are not using the correct metric/dimension in Google Analytics to get the data you are looking for. In the following image, assuming that all page views are organic and first access (landing page), the results would be: 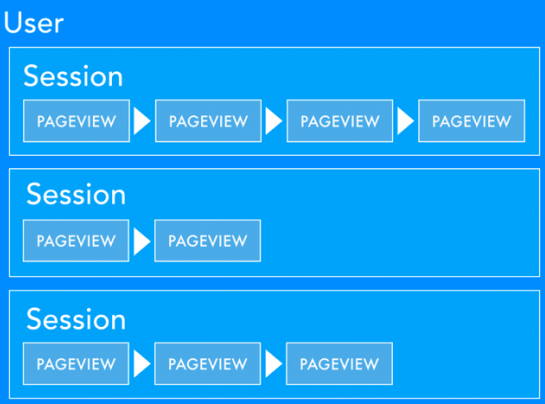 It's more likely there's a problem with Analytics than Search Console being inaccurate.

It's possible that you might have a filter in place on that Analytics view which tells it to ignore certain visitors. That would definitely mean that Analytics would show fewer visitors than Search Console shows clicks.

There is the possibility that it's the standard Analytics filter which ignores known bots. I'm not entirely familiar with any similar filters in Search Console, but it's possible they might be different. As such Search Console is reporting clicks, which aren't being logged as pageviews in Analytics because the latter does not recognise them as valid users.

One thing to bear in mind is how each service records their separate metrics. Search Console record a click on a search result, that's entirely done server side by Google. Analytics records a pageview, typically using JavaScript to send that data when the page loads. There's three things I can think of off the top of my head that might interfere with that:

The nuclear option of determining what the problem is depends on if you have access to the server's log files. You could manually track down hits on the most affected page and look for patterns which might help you diagnose why Search Console is reporting clicks, but Analytics isn't reporting pageviews. If you have log files from before the surge in traffic, running a comparison would be ideal.

So in this case, Google is tracking the clicks from their site via the actual clicking event, but the javascript on the destination page running the google analytics is blocked by the client's browser.

After some additional research, I was able to figure this out.

When a person clicks a Google job posting to view the job listing on Google, this is considered a click and is labelled as "Job listing" under the Search Appearance tab.

If the user is interested in the job and then clicks on the Apply button to be taken to the website, this is considered a click as well and is labelled as "Job details". Obviously, only this click is tracked in Google Analytics.

Not the answer you're looking for? Browse other questions tagged seo google-analytics google-search-console or ask your own question.