Stack Overflow for Teams is moving to its own domain! When the migration is complete, you will access your Teams at stackoverflowteams.com, and they will no longer appear in the left sidebar on stackoverflow.com.

Check your email for updates.

Can I compete with 20 domain authority in a high-paid niche?

I have found a niche in which demand is relatively high for a freelancer, but all top websites have 10-20 domain authority, and I think I can achieve more than that. Considering this niche is related to language services with highly-paid customers, can I compete with them? i.e. I wonder why in this niche top websites' DA is low?

DA is not a strong indicator of competitiveness. It's is not a reflection of actual authority Google assigns.

But to answer your question: if DA is everything there is to those sites, then sure, you can compete using only DA :)

You Can Compete, but Don't Look at Domain Authority to Gauge Your Competition

Domain Authority is (IMO was) a metric developed by Moz in 1999. The original algorithm was primarily based on PageRank. In 2019, the company launched Domain Authority 2.0 - which now adds some degree of machine learning into the formula.

As of the Domain Authority 2.0 update in early 2019, the calculation of a domain's DA score comes from a machine learning algorithm’s predictions about how often Google is using that domain in its search results. If domain A is more likely to appear in a Google SERP than domain B is, then we would expect domain A's DA to be higher than domain B's DA.

I still don't trust it, in fact I take all software proprietary metrics with a grain of salt. How can I trust something I don't understand? I go by instincts and observation. John Mueller has reaffirmed many times that Google does not have a domain authority metric or signal in use at Google.

BNazaruk is spot on - don't pay attention to it. Many of the most talented SEOs I know don't even use tools.

When I think about how to rank on a SERP, rather than looking at what all of the results on the first page are doing (in their content), I look at what they're not doing that is highly relevant to the query.

So within this niche of yours, look for queries where you can add unique value to the overall SERP - how can you make it more diverse?

Here is a screenshot of my site with a DA 3 and 1 backlink ranking 2nd for the term "keyword concatenation tool". 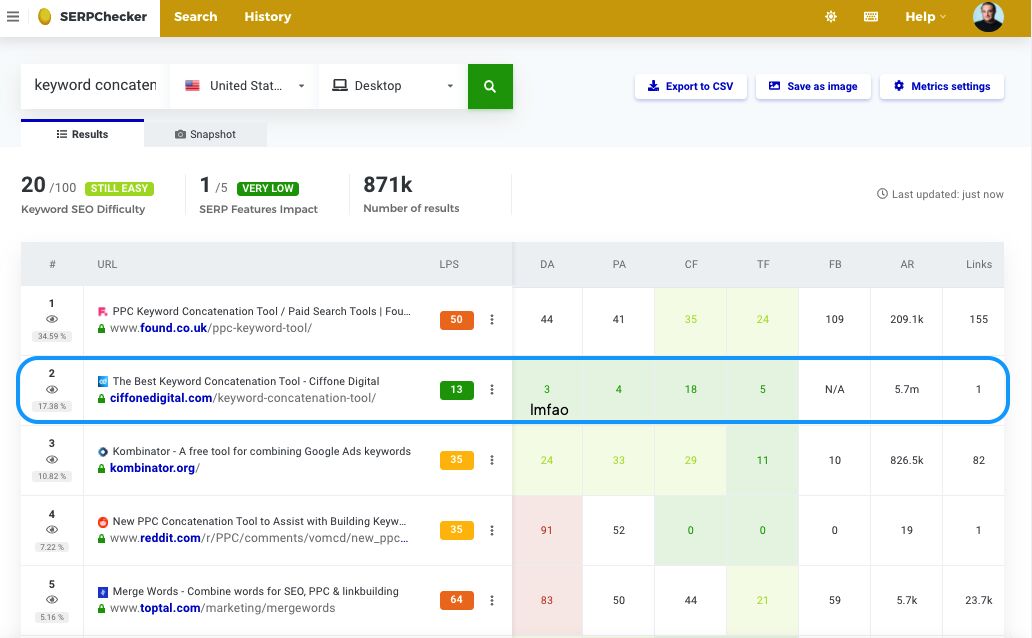 0
Why does SEO based code tips not appear to affect ranking?
5
Why is Google.co.in showing and highlighting antonyms of a keyword in search results?
3
Domestic SEO was much easier than expected. How does that impact international strategy?
3
Moving high authority domain
4
Google My Business not displaying in Google Maps Organics Results
1
Backlink building for multiple local businesses in same industry
3
Are automatically generated spam backlinks that I didn't create likely to be a negative SEO attack from a competitor?