How can I tell if a site was penalized by Google's Page Experience update? If it was, how can I fix it?

I have a site that was doing well until around July (2021). Since then, I've seen target keyword rankings dropped from the 1st and 2nd page, organic traffic has decreased significantly. I know that in July Google also released the Page Experience algorithm update, and I have a feeling that might be apart of it.

Attributing the loss of keyword rankings/organic traffic to any one algorithm update can be tricky. A great place to start is Panguin Tool. It plots your Google Analytics data against a timeline of Google algorithm updates. 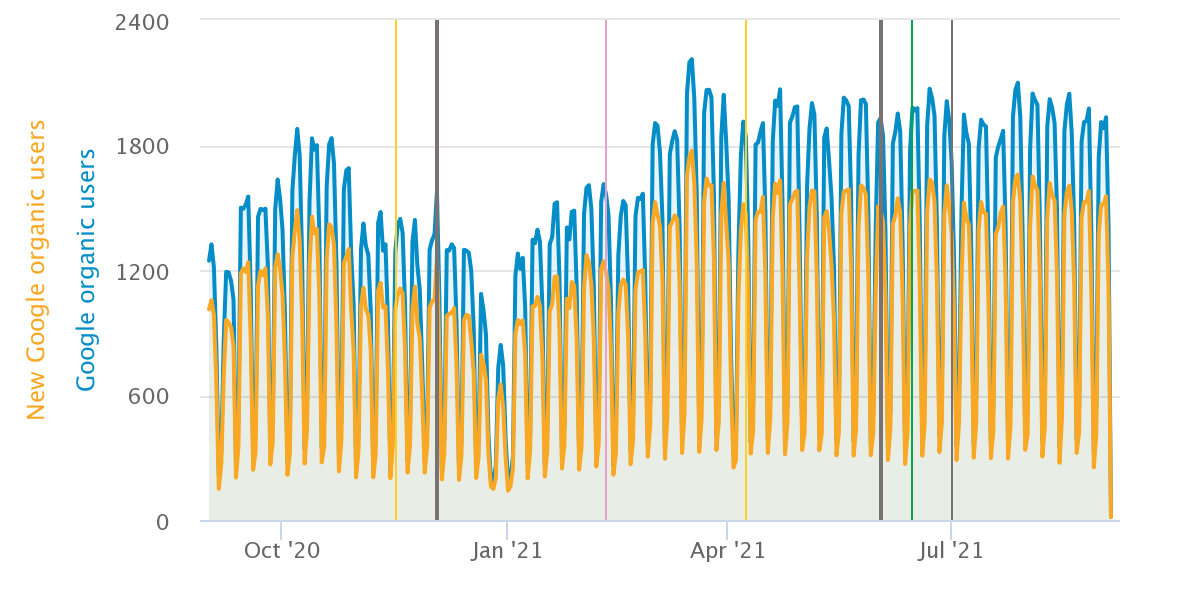 Using one of my own sites as an example (shown above), we can see I experienced a fairly significant drop in organic users last December. If I click on the (brown?) bar the tool gives me some info: 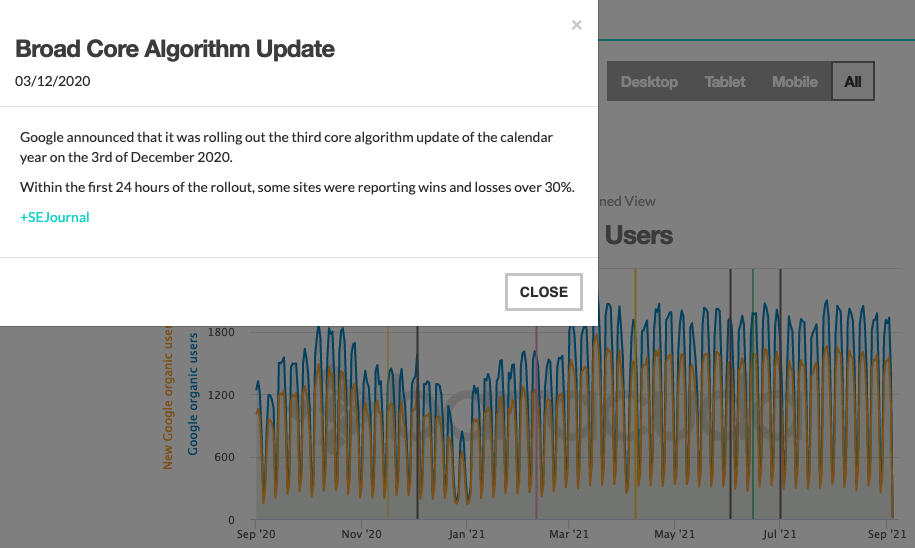 So in this case I saw a decrease in both new and returning organic users after Google's Broad Core algorithm update that was released last December. For Google, Broad Core algorithms are generally not about one thing or another, but rather an overall re-assessment of the index and the relevancy of the pages that currently rank for a wide variety of queries.

John Mueller on algorithm updates and the "winners and losers" in rankings:

“It’s essentially just saying, from the way that we determine which pages are relevant, we’ve kind of changed our calculations and found other pages that we think are more relevant. So it’s not a matter of doing anything wrong and then you fix it (and then Google recognizes it and shows it properly). …More it’s a matter of well we didn’t think these pages were as relevant as they originally were. And these kinds of changes they can happen over time.”

When Google releases a targeted update we are typically given notice ahead of time. They also publish a lot of information and instructions about how webmasters should act to avoid their sites being negatively affected.

For Step 1 I'd recommend use Panguin Tool to and then go from there based on your observations.

As Stephen mentioned in the comments:

How do you know it was page experience? Google rolled out multiple updates around that time. It is very difficult to pin ranking drops on any one Google algorithm. Assuming it is page experience, has the site improved its pagespeed insight and mobile usability scores?

Stephen is right. It is very difficult to prove with absolute certainty that a targeted update (or even a broad update sometimes) caused a change in organic traffic or rankings. However, there are some ways that we can increase our confidence.

First lets look at what the Page Experience Update introduces.

In this case, the best that you'll be able to do prove statistical significance by running one or more Statistical Hypothesis tests. You'll need your Organic Traffic data, Organic Keyword Ranking data before and after the Page Experience update was released along with your Core Web Vitals scores - and you'll have to run a bunch of those tests to get solid averages to control for variance between runs. To collect this data I'd recommend using the Page Speed Insights API.

In my Core Web Vitals experiments I use a Paired T-test but there are plenty of other types of tests you could use. Perhaps better ones too. However, going further into the actual statistical concepts/testing methods would be off topic for this site.

I'm sure our friends over at Cross Validated can give you further advice, but do your research first, review their guidelines, and go to them with a clear and concise question. I'd recommend asking multiple specific questions rather than one very broad one.

Not the answer you're looking for? Browse other questions tagged seo google-search-console ranking penalty google-algorithm or ask your own question.

21
How to diagnose a search engine ranking drop?

1
How to check if my site was penalized by Google?
21
How to diagnose a search engine ranking drop?
2
How can I obtain past webmaster tools warnings/manual actions on a site with a previous site owner?
5
Can a site be 'penalized' by Google for going 'stagnant' for a long time?
0
How do I make my spam site rank well and not get penalized?
4
After site was hacked, how to remove foreign pages from Google's Index?
1
How to fix excluded URLs after website was hacked