My website right now is marginal for page loading speed on mobile. Originally written for desktop, I use a lot of images that are relatively high resolution, and only lightly compressed.

I'd like provide srcset images at various resolutions, but before I start, what are the optimum sizes, and how are they determined?

First approximation that occurs to me is (image as % of screen) * (viewport in pixels) and then calculate this for typical (and what is that, this week?) screen resolutions of desktop, tablet and phone.

On reflection, this approximation is naive.

Users on mobile devices may want to be able to turn their device without having to reload images. It would make sense to provide only the size for landscape orientation to improve usability.

I pulled screen width stats from my largest website. It gets millions of visitors per month on a wide variety of devices. The site is a finance website. This data is collected by Google Analytics. My takeaways:

Also keep in mind that your images will probably be somewhat less than full screen width: 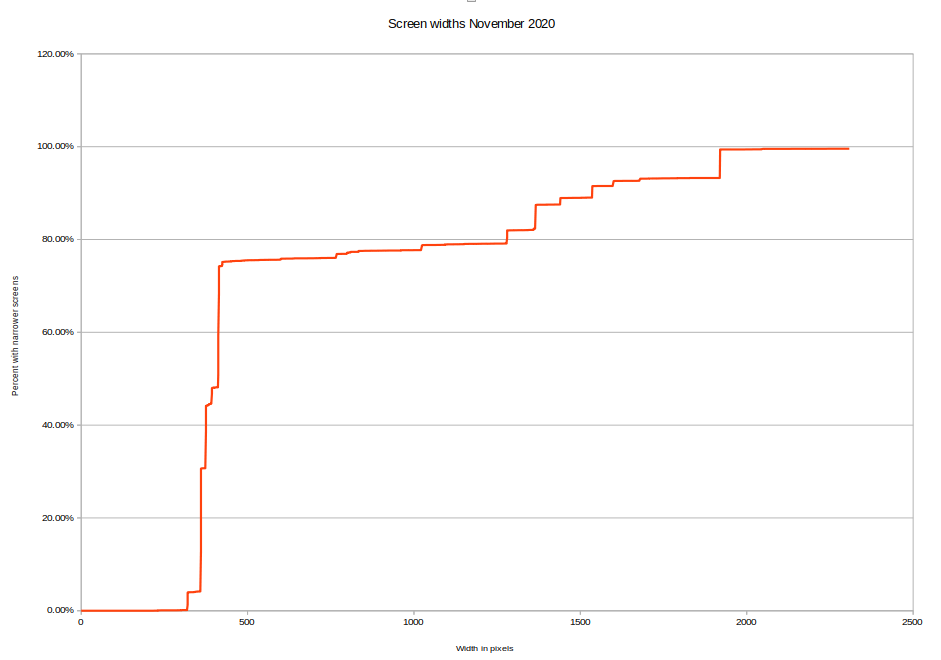 Zoomed in on the steep mobile section 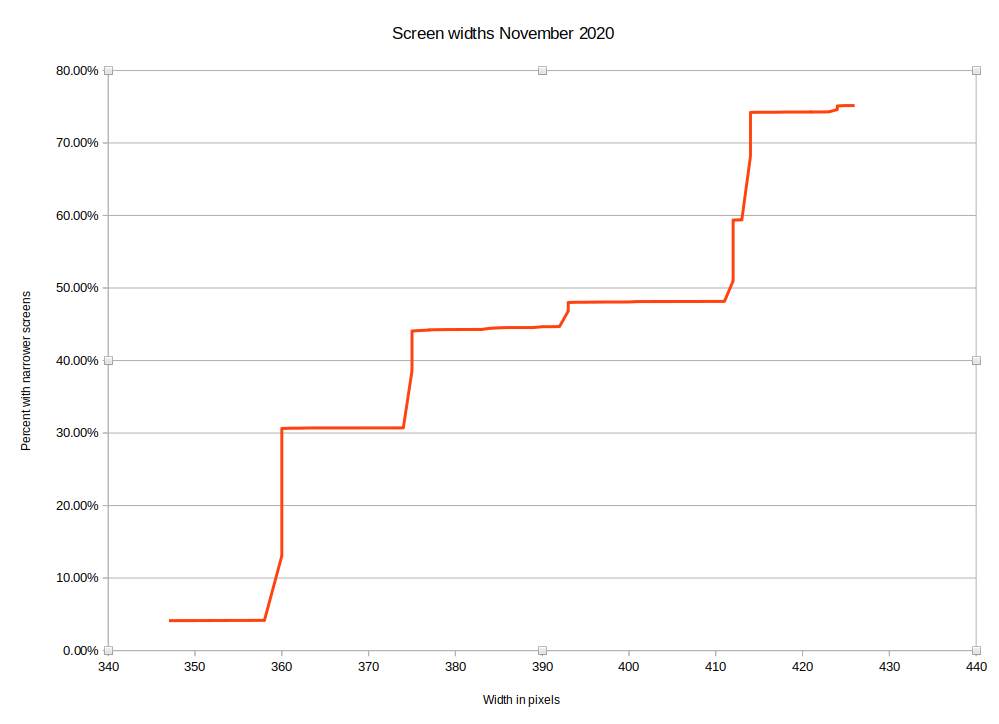 Here are the top 30 device widths from that data in a table. Any other width represents less than 0.1% of users.

Google Analytics also provides "browser size" as a dimension. Unfortunately, they appear to round the browser widths to the nearest 10 which makes the data less useful. For example the common 424 screen size appears to be lumped in with the 420 browser width. The same goes for 1024 which appears to be rounded down to 1020. In any case, the data does show a much wider variety for larger screen size due to not-maximized windows.

This is a design decision, not a mathematical one. It is impossible to determine how a user will view the image. There is no mathematical equation for what a human likes in design. Using device width works until tomorrow when a new device introduces new sizes. And there are, now, too many devices to keep track of.

Therefore, the best advice is to make your web page wider and taller until the image doesn't look good anymore. That will be your break point.

This article on Medium: Choosing the right sizes for responsive images

points out that 3 images is probably not enough, and makes a case for having a half dozen.

He mentions having servers that resize on the fly to provide any size requested by the client. As someone sharing a server with umpteen other websites, I don't have access to this server modification.

Unlike the Medium article, size series shouldn't be a linear scale, but an exponential one. Cases can be made for using the following ratios:

1.414 (square root of 2) This allows the resize to be made by making 1 math intensive interpolation, then the remaining ones are straight forward scale by 2, and resharpen.

Fixed percentage each time. This has simpler logic in your script setup, but you may get artifacts from the repeated sampling. Test first before resizing your entire library.

The exponential set is based on the idea that downsampling an image by 20% or upsampling by 5% will still result in a pretty good image, AND will mean you have a fairly small set to deal with.

Cloud Four says that from a performance bandwidth case, you want closer spaced resolutions as they get larger because the size goes up quadratically. This minimizes the memory foot print, and wasted bytes. I don't buy this, as machines that request larger files will usually have more memory and better network connections. It may make a small difference in server provisioning. However if you use a content distribution network, you have to pay for a lot more caching. If really pinching pennies you will need to optimize between bandwidth costs and storage costs.

Note on sharpening: In photo circles, the recommendation is to sharpen as the last step in image processing. Some work by Dave Riecks on the ControlledVocabulary website claims that resizing in multiple small steps with minor amounts of sharpening between each step results in better image quality.

2
What is the smallest, standard pixel viewport for smartphones?

2
Set expiry date for image or resource
2
Strategy for image sizes
5
Image as a background for a website - good or bad?
4
One image for different image sizes - physical size on website
3
How do I enable users to download large images on mobile in an SEO friendly way without complication?
1
Large image and ad unit above the fold on mobile site
1
Impact of storing image sources into custom data attributes
0
What are the best image sizes for the Google Chrome mobile website audit?
2
Can you indicate to Google Images which image it should index from srcset?
3
How to work with image sizes for different resolutions for a website?