I'm working on the website maisonfribourg.ch which was developed using grav.

I'm trying to track form submissions using GTM. In the attached image you will see a blue-colored button, clicking it brings up a pop-up: 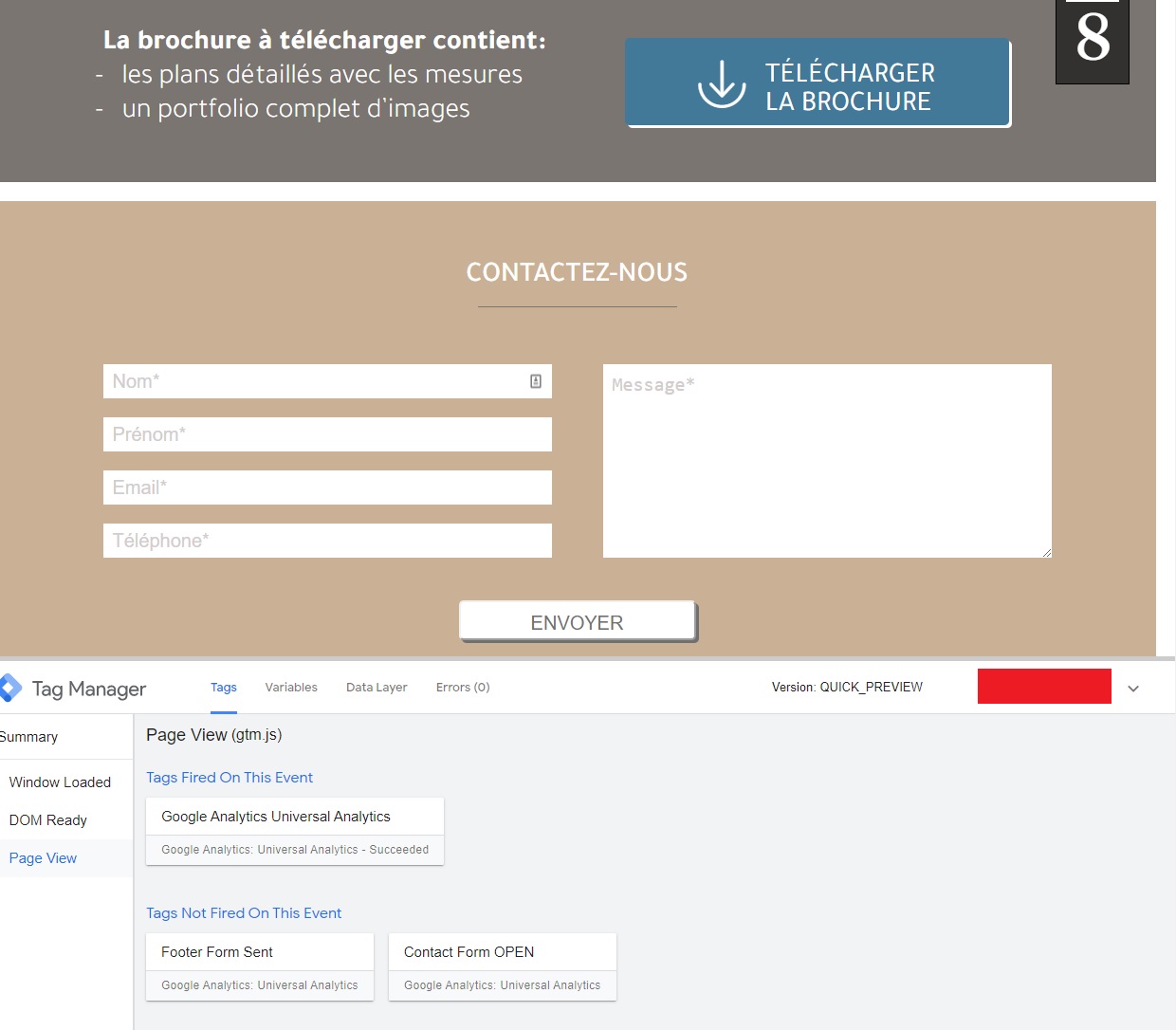 The developer says that the site is using dataLayer.push to include the following elements in the data layer: requestFile : open
requestFile : sent

These elements track the opening and the sending of a contact form , respectively. I will start by describing how I'm trying to track the OPENING of the form. I wish to track both of these actions using GTM, i created a Variable named 'requestFile' so that GTM would be aware that this is an item I'm interested in. 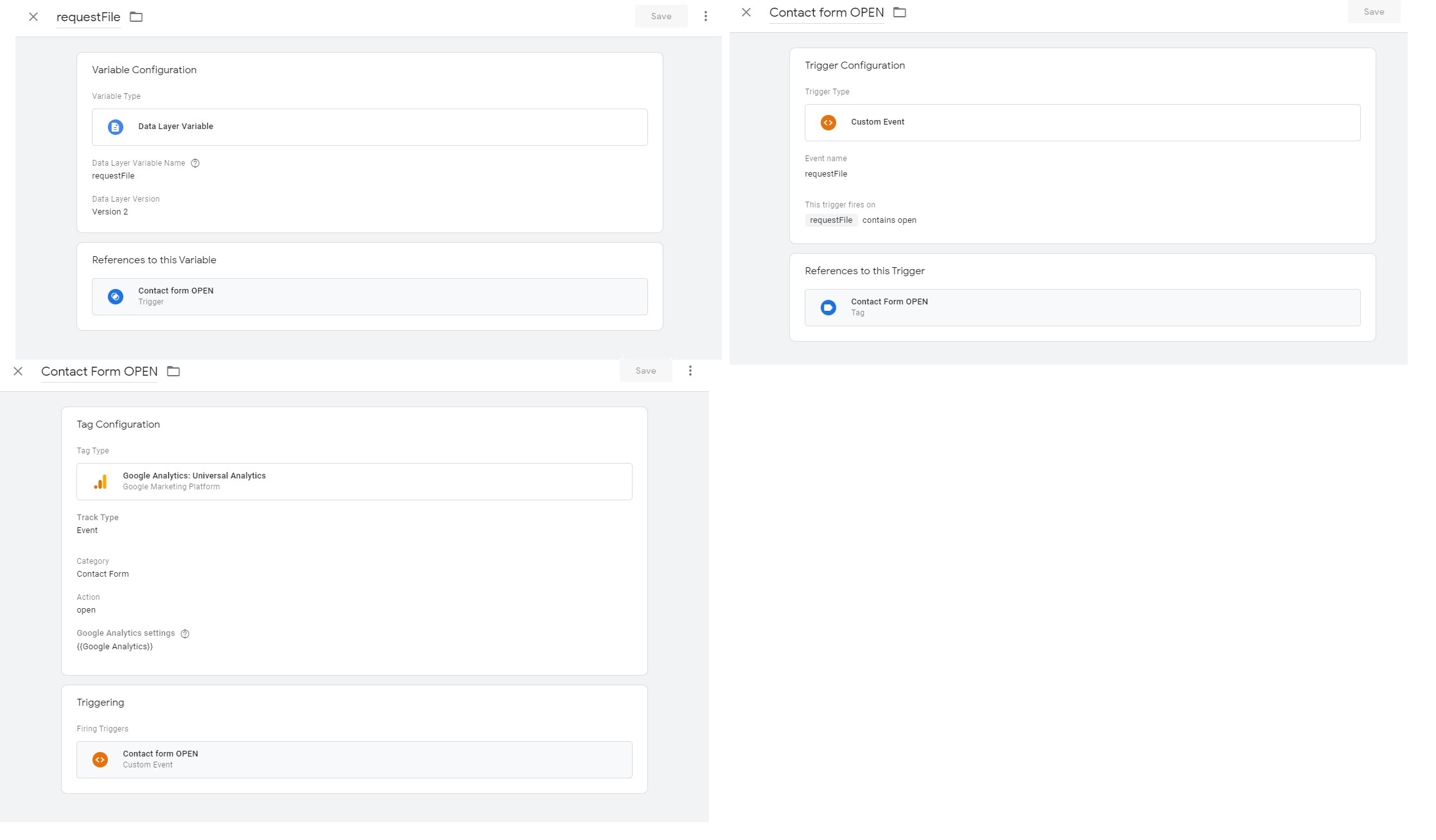 I created a trigger , based on a Custom Event Finally, I created a Tag for It Here's an image of the final result 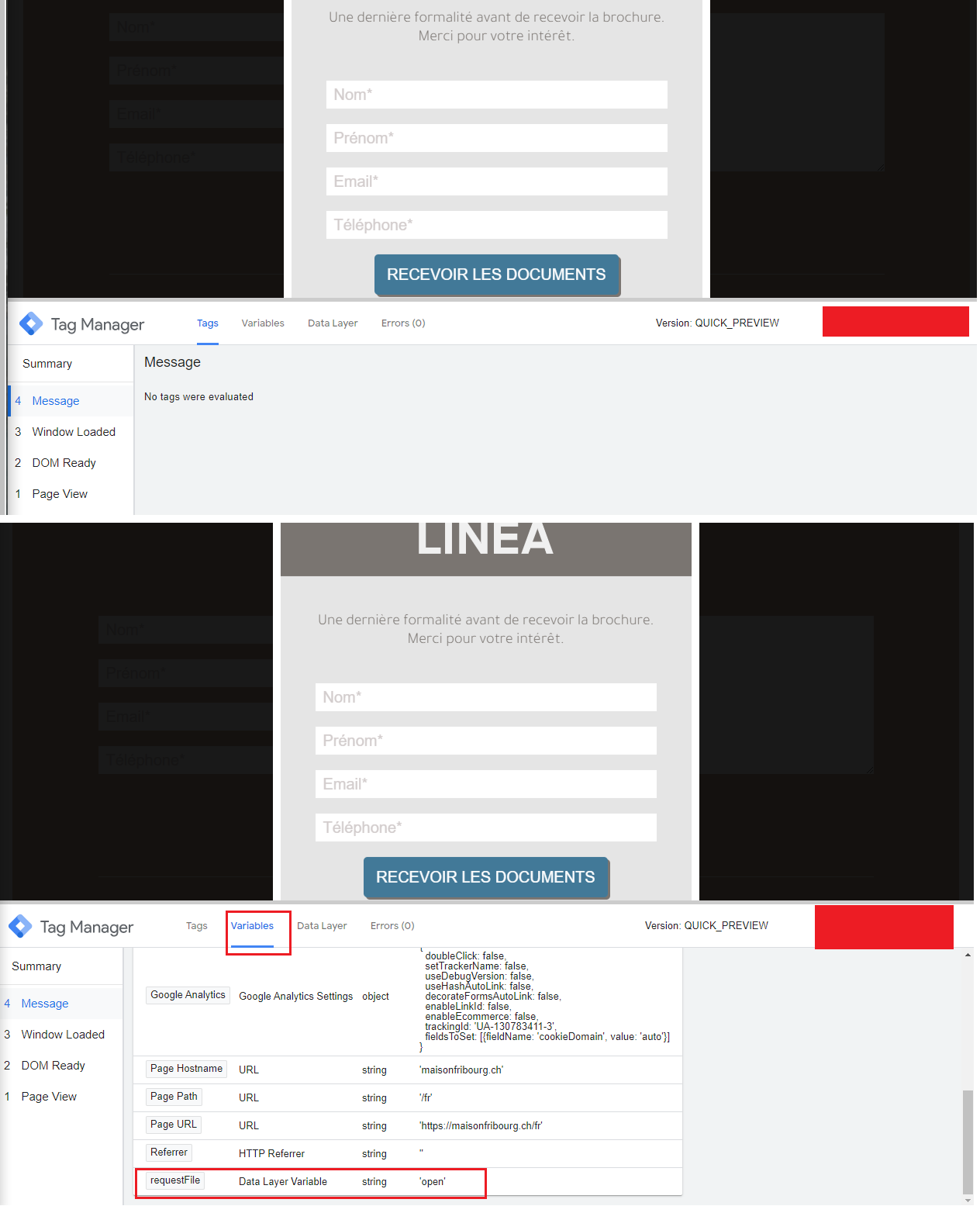 So I believe the debugging console shows that a Data Layer element exists, but somehow no tags are being triggered, not even the Universal Analytics one.

What am I missing? Have I misconfigured something?

Thank yo in advance for your help

DataLayer variables aren't looked at for Custom Event triggering. You'll need a different syntax to get your event to fire.

The GTM custom event documentation has an example similar to what you are trying to do. To trigger a custom event and also capture open/sent, you'll need 2 things pushed into the dataLayer.

Your variable is correctly set up to capture the value "open" or "sent", but you also need a dataLayer entry like

Then your custom event trigger would have Event Name of ContactForm but still be scoped in to when requestFile contains open.

However, do you need custom events to track this? You can use link and button clicks and form submissions as event triggers as well. Provided you can specify the buttons used to open and submit the contact form (or the form itself, for form submission) with CSS, that may be an easier way to set up tracking.

Not the answer you're looking for? Browse other questions tagged google-analytics google-tag-manager tags or ask your own question.

1
Is implementing Data Layer the only way to track revenue in Google Tag Manager?
4
Google Analytics Goal with Radio Selection and Onclick Event
1
Average Session Duration Total Incorrect
2
How does GTM know to send enhanced eCommerce data when it's added to the dataLayer?
1
How to set up a custom dimension with GA+GTM to distinguish pages with and without buttons
1
Google Analitycs and Woopra page views disproportion
0
GTM event working but is not showing in Google Analytics Events, why?
0
Facebook Pixel is not firing through GTM
1
Why do pageviews not show up in GTM debugging like every other event?