Why don't CDNs reveal an IP to be used as an ANAME (alias)?

I've read through the docs on AWS CloudFront and CloudFlare CDN, and both of them appear to require either ownership (to be the registrar) of a domain, or at least to have their DNS pointed to as the nameserver by the registrar which owns the domain.

This comes as a surprise to me for I had imagined that all I'd have to do is use an ALIAS and an IP to point to the CDN (like most servers). From what I know of a CDN, they're just servers which specialize in load balancing and caching.

What about the way CDNs function makes it so they require full control of a DNS and don't simply reveal an IP to be used as an ANAME item in the pre-existing DNS?

You have some misconceptions about what a content delivery network (CDN) is:

Here is a network diagram showing multiple web servers being used with a load balancer and a CDN: 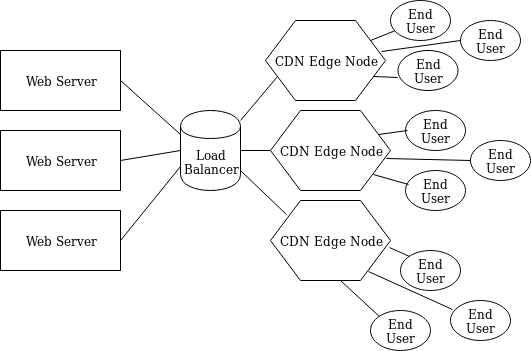 To get this to work, a CDN plays tricks with DNS. Rather than just returning an IP address for the domain name, it returns different IP addresses to different users. It does so in such a way as to try to make sure each request from a user goes to the closest edge node.

The speed increase comes when a user requests a cached document from an edge node. Then:

To be able route different requests to different edge nodes, the CDN needs to be in control of DNS. Using an ANAME won't work because that would return the same IP address to every user.

Here is an in-depth article that has quite a bit about different ways that CDNs work: https://www.sciencedirect.com/science/article/pii/S2352864817300731 See section 2.4 which goes into DNS based redirecting which is the style that I've described in this answer.

The article notes that CNAME DNS records can be used. However, CNAMEs have practical limitations. They can't be used for the bare domain name, only for subdomains. If you want to run your website without www, a CNAME is not possible.

Not the answer you're looking for? Browse other questions tagged dns cdn or ask your own question.

1
Third-party SaaS will also host our web site. They want our registrar username and password. Is this normal?
1
DNS propogation question with name server change
2
Private NS propagation
1
CloudFlare DNS: Downtime failover host
3
Unable to add IP address as authoritative DNS on GoDaddy
1
Good, or Bad? 'www A Record (IPv4)' - “website has a CName Record.”
3
Registered domain on GoDaddy, pointed to Cloudflare - cannot Addon domain to my hosting
1
How to use CloudFlare and web host at same time?