Chrome flickering while DevTools is open

For a few months now, making me believe this is completely a Chrome update (Version 76.0.3809.100) that I just can't adjust, whenever I open DevTools, my production sites flicker. In the console, it appears that repeated requests to Google Fonts may be to blame. I can block the request, but then Chrome stops displaying half of my styles. So I can't develop in Chrome! 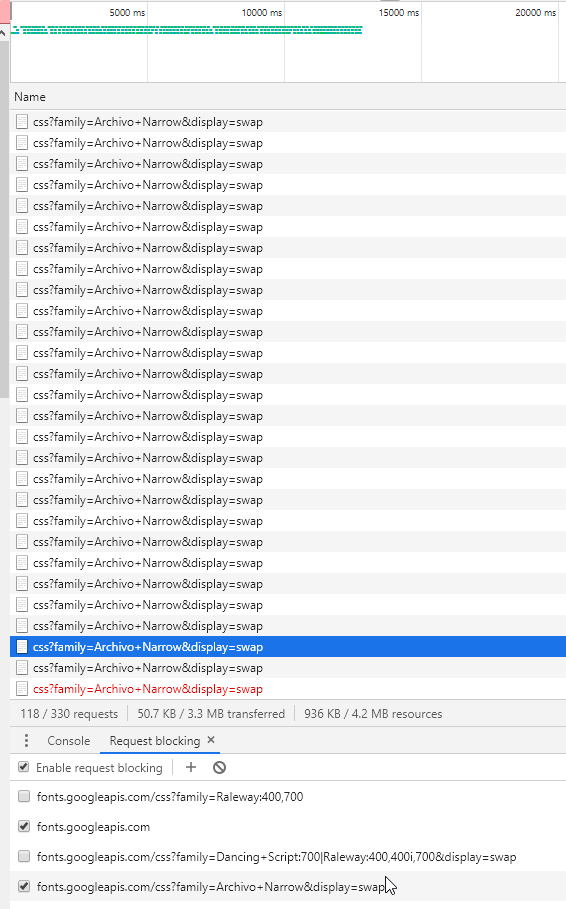 Discontinuing use of Google Fonts is not really an option. Right now, just developing in FF is my answer, but then I miss webkit rendering issues until much later in the process (using emulators at that point).

Raleway has been used, but I don't think this has to do with rendering as I can see Raleway whenever I do use it. I've tried disabling cache in DevTools. My search in stackoverflow deals almost entirely with the font in question not appearing/loading - but my font does appear as it should.

The flickering Chrome only stops flickering when I Block Requests to Google Fonts.

And of course, just trying to find references to this issue is impossible because the search terms are just too broad. Any ideas? TIA I'd tag "Google Fonts" but I don't have a reputation to defend. But it should be tagged! :)

Browse other questions tagged google-chrome fonts development or ask your own question.