Google Analytics funnel with event step and destination as goal

Is there a way to have a GA funnel with a mix of destinations and events?

For example, my current funnel is

But I really want to find out if the user watches an explainer video on page W.

So my funnel would be

I feel like this should be a pretty common ask, but, everything I've seen seems to suggest you need to chose a funnel of pages or a funnel of events?

Unfortunately Google Analytics goal funnels are pretty limited: you can only attach them to destination goals, and they can only consist of pageviews. (The "required" checkbox, also, only determines whether a given conversion will show up in the report Conversions > Goals > Funnel Visualization; something that hits the destination page without going through the funnel will count as a goal conversion regardless.)

You can get at "watched video before converting" data in other ways. Your desired funnel could be turned into a sequence segment with 5 steps, for example. The screenshot below shows a basic setup for the first 3 steps; you could also simplify to just the video and page Z depending on how your site is set up. 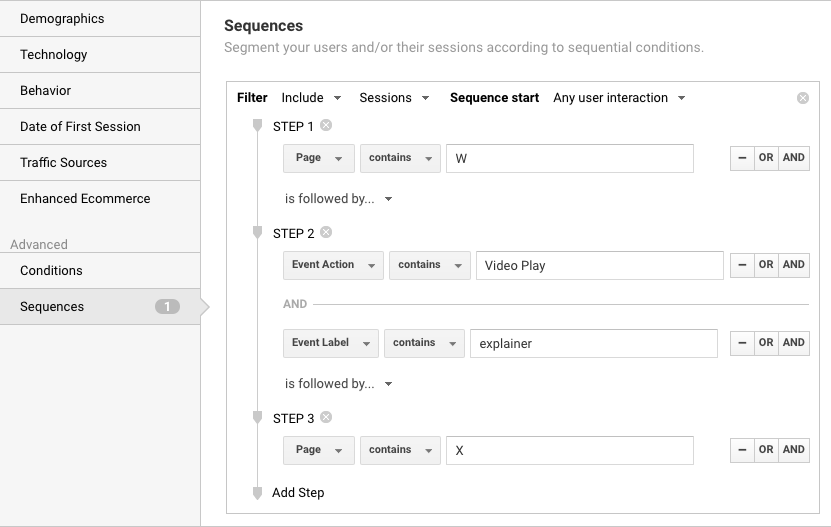 This will tell you in how many sessions your funnel was completed, though you won't be able to see abandonments.

Alternatively, you could segment on people who watch the video and see what their goal conversion rate is, or segment on sessions with this goal conversion and see how many video plays happen. Both of those would be defined in the Conditions panel.

[If you're really set on getting the video into the funnel, you could fire a virtual pageview - a real pageview to GA, just virtual from your perspective - when the video is played, but that will count as a pageview for every purpose and therefore will make your other data less accurate. Just including it for completeness!]

Not the answer you're looking for? Browse other questions tagged google-analytics event-tracking or ask your own question.