I encountered a problem for my website page in Google SERP. I noticed that Google shows two different titles and URLs in the SERP. Both URLs point to the same page on my website. 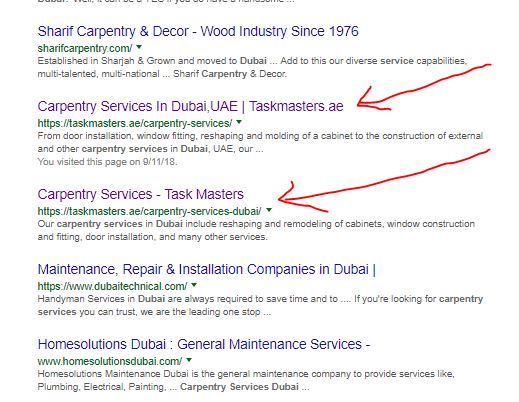 I checked out your website and page, and everything looks right. Your XML sitemap, your JSON-LD structured data (testing tool did not detect the old URL), your robots.txt (but feel free to remove the Allow: / directive, as it's redundant), your canonical tag, your links in the nav... And the response to your old URL is a 301 redirect to your new URL... So it looks like you've done everything right.

The good news is, I did an incognito search for your page, and for the query "carpentry services in dubai" it came up in the middle of the second SERP, with the correct URL and title tag, and without the incorrect version.

How long ago did you change the URL and title tag, and had Google crawl it? While 301 redirects (and proper canonicalization and sitemap links and nav links) tell Google what the proper URL should be, sometimes it takes them time to notice and make the change. There's no set timeframe when these changes occur. But your page seems to be on its way.

Some other things you can do:

When did this start? Do you have any metas like og:title? If so, do they happen to be different than the actual title tag (whether or not they have any remnants of the old name/URL)?

I work on a pretty large site, and starting on Sept 15th or so at the latest (could be a couple of days before but hard to know for sure), Google has been using the page's H1 tag for the title - instead of the actual, and better, title tag - a conditionally modified version of the H1 tag. After that weekend, impressions were up, rankings didn't go up or down more than the normal fluctuation of +/- 0.5-1.5, but CTR tanked. I'm curious if your title tag woes started at the same time - maybe it means something, maybe it doesn't.

I had a different site a few years ago that once had something more similar to your issue - Google was actually appending the company name to the end of the supplied title tag on a small, but still significant number of pages that used to have them, but like yours, it was a while ago and the new ones had been showing in the SERPs just fine until then. I don't remember how long it took to resolve, but it wasn't more than a few weeks. The suggestions given here are good ones, but I think it'll eventually resolve on its own, too.

Not the answer you're looking for? Browse other questions tagged seo google-index serps or ask your own question.

1
Yahoo search: different results shown in two identical searches
0
To have multiple sites with similar content on the same server but different IPs?
4
Title of the page in search results and title of google's cached version are different. Why?
3
Why are the same two web pages appearing on the first page of Google's SERP?
2
Redirected urls show in serp, with the original permalink but with the title and meta of the target page
2
2 URLs pointing to one website with a unique canonical URL
2
Will be a identical title for the same url with different parameters known as duplicate title?
1
SERP Google - Mobile URL in incognito and normal URL on Desktop
1
Is it a good or a bad SEO practice to create a same URL with different directory?