I am looking at Google Analytics behaviour flows report and can see multiple interactions for the same page name some are on the same column and some are on different columns but with traffic flowing between. What are the reasons for this to happen? The only one I can think of is different query strings though these aren't being shown. Are there others? 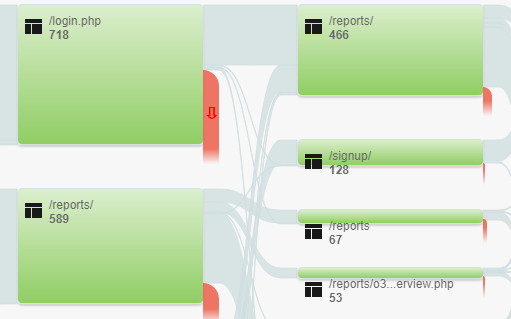 The Behavior Flow report is about the path taken through the site during sessions in your date range. The columns correspond to first page, second page, etc. You should expect to see duplication of pages in different columns because not everyone will visit a given page at the same point in their session.

The duplication you are seeing within the second column is due to your site allowing both /reports/ and /reports as URLs. If these are actually the same page, it would be good to standardize, as Stephen Ostermiller advises in his comment. Since it appears there are other pages in that directory, /reports/ is the better one to allow (that is, force /reports to add a trailing slash). That way your Behavior > Site Content > Content Drilldown report will work properly.

Here is how to read your screenshot:

2
Custom report based on query string in Analytics
1
How are Google Analytic average column values calculated? (excel gives different results)
1
Google analytics custom referal codes
0
Discrepancy beween Google Analytics and Adword Data
1
How to send different Events to different Google Analytics accounts from a Same Page?
2
How can I track which links are clicked on which pages in Google Analytics?
2
Tracking splits in behavior flow for a 'simultaneous' split test?