Will setting a custom crawl rate in Google Webmaster Tools affects index or have other negative consequences?

My site was running well for the past three years. Recently Googlebot's request my server got increased. and at one time I got network unreachable error. When I contacted my hosting company they asked suggestions from me and I gave a list of Google ips to white list. They said that their server will block IPs which request huge numbers of pages.

After that my site appeared well in Google. Now after a month, I get "network unreachable" reported in Google Webmaster Tools. When I inquired to my host, they said I have to change my plan from shared hosting to a VPS account or a dedicated hosting.

I have 300 links indexed by Google. Previously the crawl rate was default and now I reduced to the one shown in the picture. Will this affect my indexing in Google? 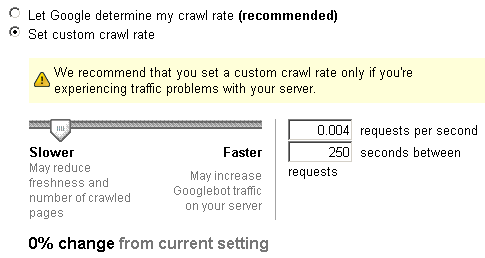 Will my host block Google IPs for the new lowered crawl rate? I have 300 links indexed and they irresponsible say that I have to switch over to vps.

300 Links at 0.004 requests per second is next to nothing. I cannot imagine any hosting plan (even free ones) having a problem with this. If your host is throttling/blocking this then I would recommend getting a new host! (which is it by the way?) This is definitely not a reason to switch to VPS.

The way it will affect your indexing is that they will check a given page on your site less often. If the content on that page has changed then

Not the answer you're looking for? Browse other questions tagged google-search-console web-crawlers googlebot crawl-errors crawl-rate or ask your own question.