I don't understand how multiple @ symbols work in the DNS settings, and what will happen when I edit the associated records.

The screenshot below is what is set up already for a website I'm working on. 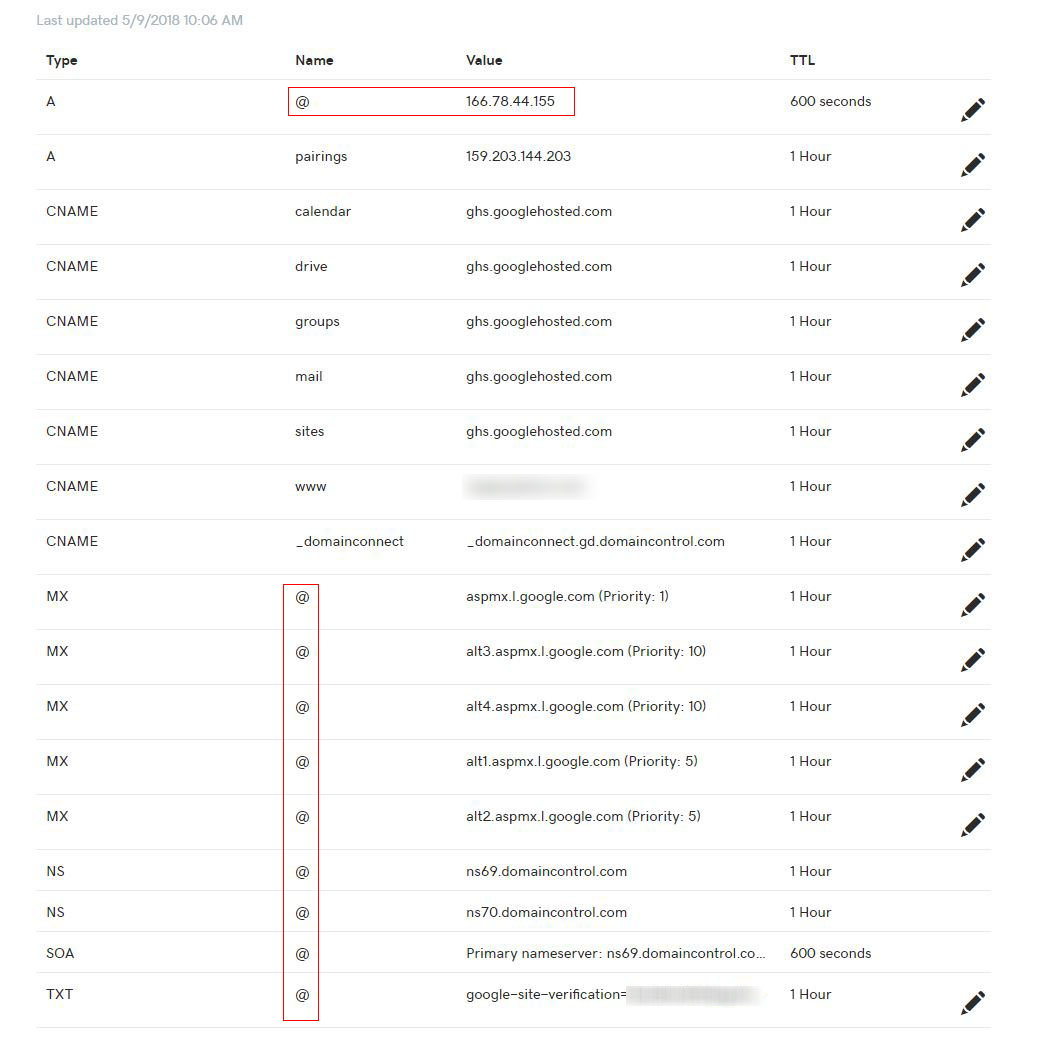 I don't understand how multiple @ symbols work in the DNS settings

Absolutely like any other kind of resource record, there is nothing special about this, it is a shortcut to the zone itself.

For the zone example.com, this:

is exactly the same as:

So for the explanation of what happens when multiple records for same label, it is exactly the same: resource records are sets (and not lists, as there is no order), so each relevant record is returned for a given query on a type.

Using @ is just a shortcut when writing the zonefile. It has no impact on how the DNS messages are exchanged, and does not appear in packets.

And to go back to your question, each element of the set is independant of the other, so you change change one without impact to the other (they will still be replied together for the relevant query). Special rules apply of course when you change or add a new resource type such as a CNAME that has specific constraints.

You can change the IP address of your @ A record it will impact only resolutions of your zone name as label (because @ is your zone name), it will not impact resolution of pairings label or other ones (except if they are CNAME records towards the zone name of course, in which case the change in the A record will apply to all of them, as it is the exact purpose of a CNAME record).

You can change the A record for @ to your new server's IP address. What this will do is point your website example.com to the new server.

You may also want to create a new www A record to point the WWW version of your website (www.example.com) [if not already automatically pointed with the standalone @].

You can change pairings which a subdomain (pairings.example.com) to the new IP address if needed too.

As for the MX (used for email settings), CNAME and TXT records, these will remain as per their current settings. I'm not aware of what SOA does, so hopefully, someone can help you with this.

As for the NS which stands for Name Server, there are normally two records. Changing these will point the whole DNS (all the records) to the new host [of which the NS is assigned to]. You shouldn't change this unless you're planning to carry across all the current records to your new host too. As if you don't, these records would no-longer function.

In this case the @ symbol means the domain apex. That is: the domain name with no subdomain.

So if your domain is example.com:

If you edit the A record associated with the @, it will change where your bare domain points. The A record for the domain apex usually points to the same IP address as www. You could have separate servers handling the two if you really wanted to. One use case for that would be having the domain apex point to a redirect service that redirects the HTTP requests to www.example.com while having a different server that serves the main content for your domain on the www subdomain.

Note that a CNAME record should not be associated with the domain apex. You should always use an A record there. A CNAME with @ isn't allowed by the DNS spec although some DNS servers won't complain if you try it. If you end up with a CNAME at the apex, it causes MX records to be ignored and email to be misdelivered.

Not the answer you're looking for? Browse other questions tagged dns ip-address or ask your own question.

2
Recommendations for managing DNS issues when hosting customer sites
4
Which comes first DNS or name servers?
1
How do I add an spf for a Postmark App sender signature when there's an existing spf record?
2
Creating a custom DKIM (Domain Authentication) in DNS settings
1
Mailgun not finding DNS records on my VPS
1
Delegating DNS: Are my AWS Route53 NS records propagating correctly?
3
TXT DNS record for static github site
1
DNS Settings and the TXT record for authorizing email sending from the domain