How do I get keywords indexed when text is so complexly styled that words are broken up?

I was required to implement a web page that has sections where each has a designed title. Basic structure like the following:

My problem is that the web designer made titles visually complex like the following image: 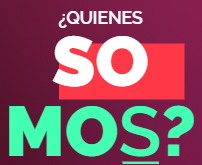 Note that "SO" and "MOS" in the picture are not two words actually but just one word "SOMOS", but that's the design I was asked to achieve.

I thought about giving a title attribute to the container DIV but I read it just helps for readability and not for SEO.

I also thought about using an image and give it an ALT attribute because I understand search engines consider ALT attribute only for IMG tags but I don't think that is efficient to use images.

I finally thought about using SVG and giving it a TITLE tag as I read somewhere this helps describe the SVG but I don't know if that helps with SEO.

Do you have any suggestions to make my designed titles SEO friendly? or may be my current structure will somehow be understood by search engines already?

UPDATE: I just used http://www.seo-browser.com page to crawl my page and I got the following output: "ĀæQUIENES SO MO S ?" I don't know if it is safe to think Google will do the same. If it does then I need to fix this.

UPDATE: At least with Browseo.net there was a difference when deleting spaces between DIVs

I hope Google sees it the same way.

I think You can wrap all the divs into one h1 tag. My guess is that Google will essentially see it as <h1> ĀæQUIENES SO MO </h1> or as <h1>ĀæQUIENESSOMO</h1>

The client window sees it as:

In the end I wouldn't obsess over h1-h3 tags too much. They're a keyword ranking signal but Google has learned how to analyze the content on a page far beyond what it could several years ago and so the h1 tags are likely not as important as they once were. I don't think h1 tags are necessary on a site and a lot of my sites don't even have them, although they would probably give it a slight SEO boost.

Not the answer you're looking for? Browse other questions tagged seo html or ask your own question.