Will a forum work without moderators?

I'm starting a forum site. Right now, its only me, so I won't have moderators. Will this be a chaos or it will work anyway?

(My site is a discussion forum focused on a country).

EDIT (will this spam button and rating thumbs be enough for now?): 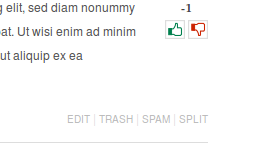 Depends on your definition of "working". Yes, you will get traffic. Yes, it will be chaos. If you don't care about the chaos, then it can work. Otherwise, you are going to run into trouble really quickly.

An even bigger problem is if you do allow the chaos for a while and try to reign it in later. When I worked for Reader's Digest, we had a very active forum for Taste of Home magazine (a cooking/recipe magazine) that had never been moderated in any way whatsoever. We redesigned the site, integrating the forum into the site more and they tried to bring in some full-time moderation. There was huge brush-back from the community, and it pretty much seems like they've mostly given up on moderation except for in the most offensive cases. You can go there to see the result. It isn't pretty. And this is a forum where the average user is a 50 year old woman. Imagine what would happen with a less subdued audience.

I've managed several communities in the past and I would have to say that it's pretty hard to have a community without moderation. You didn't say what kind of site/forum you're starting. If it's a young demographic with what are likely to be lively debates and opinions, you'll likely need some moderation.

The two largest communities right now (which, granted, are not forums) on the web are Twitter and Facebook. Each has a moderation model of sorts. Facebook is very tightly controlled due to the myriad ways in which you can communicate and thus potentially offend. Twitter has a simpler communication model and less moderation but users can still be blocked and voted for spam, combining system moderators and user moderation.

Even in loosely moderated or systems where no moderation is apparent, often something is still happening in the background. 4chan comes to mind as a complete free-for-all and it's a gong show, which in that case, is what its users are generally looking for.

I would try to encourage users to get involved in the moderating. Just like here on stackexchange! Your users could get badges, and your loyal users may become moderators in the long run (they can mark comments as spam - like on youtube).

Since we are in a web2.0 would I would try to involve the loyal users of the community in the moderation process!

But lot depends on the topic, and your target group!

Expect Moderation will be necessary.

In high traffic forums there are often regulars that are willing to work as moderators. In low-traffic forums, you can easily mod alone, with someone to stand in when you are e.g. on vacation. Mid-traffic forums are probably the biggest problem: the community can detect spam, but it still needs to be reviewed.

(Regulars with Mod Powers are not problem-free either: often they don't understand that it changes their role completely: what once was a quirky opinion of theirs becomes a precedent for imbalanced treatment of issues)

Probably the most extreme example of a non-moderated forum out there is 2channel (ni channeru in Japanese) at http://2ch.net/.

If you're not familiar with 2channel, Google around and read up on it. It's an interesting experiment in non-moderated, completely anonymous Internet communication, but it's not been without a lot of controversy, lawsuits and police investigations. 4chan is probably the closest equivalent we have in the English speaking web.

The biggest example of self-moderated comments on the Internet has to be YouTube (barring channels that actively moderate or approve comments). I'm sure you're aware of what a cesspool YouTube comments can become.

If you don't mind a complete free-for-all with offensive comments and trolls galore, go with the 2channel or 4chan model. But if you want a forum that's going to deliver on-topic discussion in a civilized manner, you're going to need some human moderators in addition to self-moderation.

I agree with the other answers - without some form of moderation you will have chaos.

By having a "flag post for attention" button you can automate the process somewhat. If the post receives "N" flags in total or "M" flags over a given time period then it gets deleted.

However, what you will need is to limit flags to one per user and that requires have registered users so you can store their flag status in the database. You can't use cookies as a) users can clear cookies or b) log in from a different machine and vote twice.

There will be cases where you want to remove content immediately so you will need a human being (or three) monitoring the flags.

Not the answer you're looking for? Browse other questions tagged forum or ask your own question.

5
How to handle moderators effectively?
0
Is it a bad idea to start a forum on a shared web hosting server?
0
phpBB - display a public message when the whole board is private
1
Using topic titles as img alt text on a forum?
3
How can a link in a forum signature be considered web spam?
1
Removing Forum & Forum Pages From Site
1
Migrating Iframe comments to a forum
1
Lead forum traffic to a website